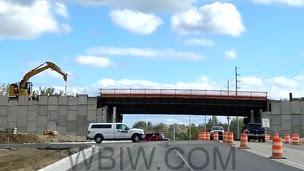 INDIANA – The new Keystone Avenue bridge is expected to hit a milestone this week.

Concrete beams are scheduled for installation over I-465 westbound starting Tuesday night and over the eastbound lanes starting Sunday night, weather permitting.

Drivers should stay alert for bridge beams being delivered to the left shoulder in the afternoons. Motorists also need to watch for lane closures beginning after 9 p.m. Two lanes of I-465 may be closed after 11 p.m. with 20-minute traffic stoppages while each beam is installed. Backups will be given time to clear between traffic stoppages, and all lanes are expected to reopen by 5 a.m.

Keystone Avenue is on track to reopen across the new bridge at the end of the year.

Thanks for your votes on the Grand Valley Boulevard bridge and for bringing both regional and national attention to this award-winning bridge.

Watch for trucks where Martinsville traffic crosses under the new I-69. In addition to loads of dirt being moved in the area, contractors are pouring concrete today for the I-69 bridge decks over State Road 252.

Asphalt crews expect to begin paving the entrance and exit ramps at Ohio Street in the coming days.

Expect short traffic stoppages near Henderson Ford Road this week as concrete beams are delivered for two I-69 northbound bridges in the area.

live Branch Road/County Road 800 N and the Indy Battleground Paintball driveway are expected to close permanently at S.R. 37 late this week or early next week. A new local road connecting Old S.R. 37 north of S.R. 144 with Olive Branch Road near Autobahn Service Center is expected to open this week.

Expect a traffic shift on S.R. 37 late this week or early next week. Northbound and southbound lanes will shift toward the center median between Smith Valley Road and Olive Branch Road.

State Road 37 traffic should watch for trucks entering and exiting north of Smith Valley Road on or after 4 a.m. on Wednesday.

A concrete crew is expected to be pouring the new I-69 bridge deck over Honey Creek.