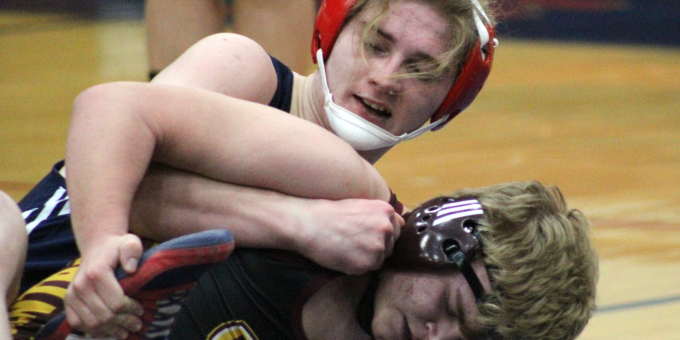 BEDFORD – Patience, persistence and perspiration, according to American author Napoleon Hill, make an unbeatable combination for success. Bedford North Lawrence, with a roster young enough to require a child-care license, will test that theory.

Patience. With at least seven freshmen and sophomores likely to crack the starting lineup of the 14 weight classes, BNL second-year coach Chris Branam will need to super-size his order of that. Persistence. The Stars, who will absorb a few lumps and bruises, will have to keep coming back for more. Perspiration. The brutal sport demands it.

With only one senior who has tasted success, BNL will have to learn on the fly as the 2021-22 campaign gets underway. The lessons could be painful, or the success sweet, when the kids are turned loose.

The Stars started official practice sessions on Monday afternoon, with 16 athletes (including four girls) answering the bell for Round 1. It’s quite the challenge, although the Stars have six returning starters with experience.

“The whole room is a young room,” Branam said. “There’s a lot of willingness to learn, people figuring out how to get better. That’s encouraging. I’m excited for the atmosphere. Because we are so young, some of the sophomore guys will have to take freshmen under their wings. They have to show them the way.”

Gunner Connaughton stands out like a flashlight on a dark night in this environment. He’s a senior who went 14-10 a year ago and advanced to the IHSAA regional at 195 pounds. BNL lost star James Covey (a two-time sectional winner at 220) to graduation, so Connaughton inherits the leadership role.

Powell was well under the weight he wrestled, Filler suffered a 7-6 loss with a late takedown in the sectional and just missed advancing, and Nelson suffered an early-season shoulder injury that sidelined him. They are all ready to bounce back.

“You can see how they’ve matured, they’ve put on good muscle,” Branam said. “They got thrown right into varsity, which is not easy as a freshman. You can take a lot of lumps. But they know the level of wrestling, what will win matches and what won’t. They’re pushing themselves.”

And then there’s the female foursome, three of them making their wrestling debuts.

“It’s interesting, isn’t it?” Branam said. “I think it’s great. There are a lot more opportunities for those girls now. I was impressed with their ability to watch a demonstration of technique and start working on it.”

BNL will start the season with the Super Six Duals on Nov. 20.