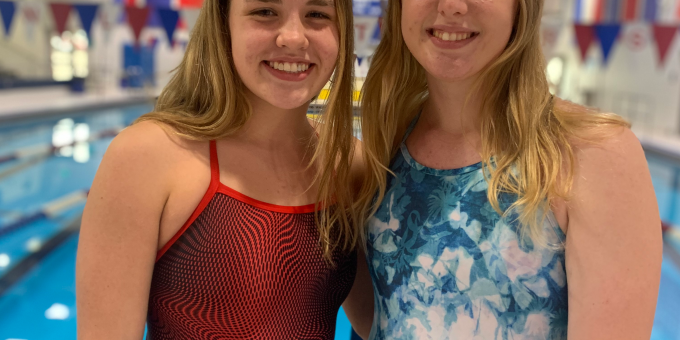 BEDFORD – Swimming culture means almost everyone has a nickname. Maybe they’re all crazy from lack of sleep with the early-morning practices, or a little light-headed from the inescapable odor of chlorine. Somebody stuck Bedford North Lawrence’s Emma Gabhart with the tag “Marshmallow.”

Nothing wrong with that. There are worse nicknames. But it brings to mind an image of softness, puffy, spongy, sugary and easily melted. Nothing could be more polar opposite for Gabhart, who will lead the Stars into the fires of competition during the 2021-22 campaign.

Gabhart, a junior on a senior-less roster, will be in the spotlight after a sensational sophomore campaign, when she won two Hoosier Hills Conference titles, two sectional races, set two school records and finished 14th in the state in the 200-yard individual medley. She’s also one of the few returning veterans with meet experience and scoring strength.

BNL lost a lot of points to graduation, and only 11 swimmers answered the call as official practice sessions started on Monday, which caused head coach Adam Young to mention the term “rebuilding” when discussing the upcoming season. Gabhart, junior Shelby Slaughter and junior diver Ashley Starks are solid springboards for that project.

“Numbers wise, we’ll be lucky to have a full lineup,” Young said. “With no seniors, that lends itself to our team to be more inexperienced.”

Gabhart commands attention. She made a big splash last year, setting school records while winning the medley and the 100 breaststroke during the sectional at Jasper. She clocked 2:07.66 in the medley during the state prelims and became the first BNL swimmer to reach the finals or consolation since Justine Jones finished 14th in the 100 freestyle in 2009.

“Expectations are certainly high for her,” Young said. “We’re hoping to see her hit the medal stand (for the top 9 in the state) this year, maybe break a few records along the way. She’s a great competitor. She’s top on the list of swimmers you don’t want to see next to you. She will show up to race, she’ll be right there and give everything she’s got. That will be a nice presence on the team.“

Gabhart is already ahead of last year’s pace. BNL was not allowed to do any off-season workouts last summer and didn’t hit the water until the season started. Then the Stars missed a week midstream with a virus shutdown.

“I’ve got some momentum now,” Gabhart said. “I know what it’s like. Hopefully I can go again and do a little better. I surprised myself last year. I usually don’t do well in big meets, but it was good to have some good competition.”

Slaughter, coming off cross country season, can also feel the improvement from the cross-training and the running miles. She was second to teammate Ursula Patton in last year’s 500 freestyle sectional race, so she’s ready to step into the wake of Patton’s graduation departure and prop up a young team.

“The table is certainly set for her, if we get the work in this season,” Young said.

“I feel like I’m a lot more prepared,” Slaughter said. “I ran cross country, met a lot of people who really pushed me. It helped my lung capacity and my kick.

“We have to lead the team. It’s always nerve-racking, being an underclassman. We have to tell them to do their best, that’s all we ask, and nobody will be mad if they don’t go a certain time. All they have to do is their best.”

The Stars will open the season at home against Edgewood on Nov. 23.