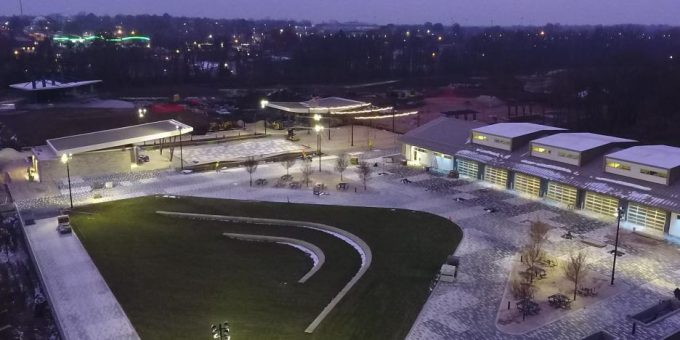 The award was announced October 6 during the 2021 Aim Ideas Summit in French Lick, Indiana.  Bloomington won the statewide award in the greater than 50,000 population category.

The award recognizes the transformation of the former railroad yard into a community asset that has attracted thousands of visitors and several new investors to the south side of Bloomington.  Using community engagement and master planning, the City’s Parks and Recreation Department worked with landscape architect Rundell Ernstberger Associates (REA) to lead the process of revitalizing the formerly industrial 65-acre site into the City’s most ambitious park project to date.  Switchyard Park is traversed by the B-Line Trail and features a pavilion, spray pad, dog park, performance stage and amphitheater, community gardens, pickleball, and bocce ball courts, and many more amenities.  The park officially opened to the public in November 2019.

“The City is honored to accept this award from Aim recognizing how Switchyard Park has renewed and enriched our community,” said Mayor John Hamilton.  “I salute my predecessors for having recognized the potential this property had for Bloomington’s future and our Parks department for their leadership in realizing the vision.  For generations to come, the redevelopment of this property will have a transformative effect on the quality of life and economic development in its surroundings, and for Bloomington as a whole.”

Aim CEO Matt Greller noted how Bloomington’s investment in the quality of place amenities spurred additional corporate interest in the community.  “When a city or town invests in itself and demonstrates their potential as a talent attractor, it gives the private sector more confidence to locate or expand in the area.  Projects like Switchyard Park exemplify place-based economic development,” said Greller.