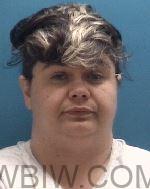 COLUMBUS – A woman was arrested Wednesday after Columbus Police officers found more than 100 pot-laced brownies at a home on Pearl Street.

According to Columbus police reports, officers were conducting “visibility patrolling” in the 1300 block of Pearl Street at just before 3 p.m. after receiving complaints about criminal activity in the neighborhood.

While making their rounds, officers noticed one of the homes on the street with the front door open. Officers “could smell the odor of marijuana coming from inside the home.” Not long after that, police say a woman later identified as 37-year-old Courtney James came out of the home, “slammed the front door behind her and immediately became belligerent with officers.”

After getting a search warrant, police discovered more than 100 brownies in plastic bags that were laced with THC, marijuana cigarettes, loose marijuana, and syringes in the home.

James was arrested on charges of dealing in and possessing marijuana, possession of drug paraphernalia, and resisting law enforcement.