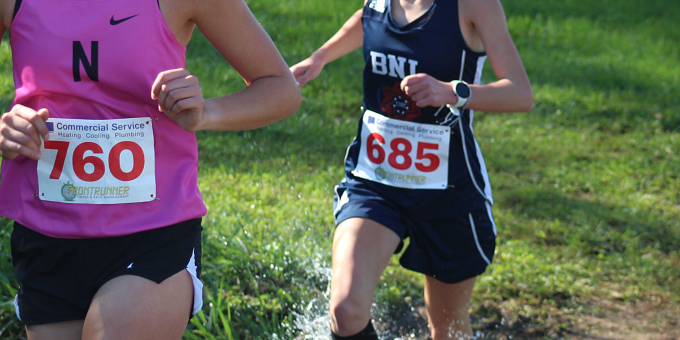 BEDFORD – A little Grace can go a long way. In this case, five thousands meters to Brown County.

For the third consecutive year, Bedford North Lawrence’s Grace Tanksley charged through a loaded field of competitors to earn an individual qualifying spot in the IHSAA semistate race. Tanksley finished 11th in the regional on Saturday morning, clocking a personal-best time for her home course, and cruised to the third stage of the state tournament series.

The top five teams, plus the top 10 individuals who were not members of qualifying teams, advanced to the semistate at Brown County on Oct. 23. BNL freshman Jonah Bailey will join Tanksley at the next level as he advanced in the boys race.

Tanksley, who recently made a verbal commitment to race for Waynesburg University, is small in stature but big in heart. Getting boxed in a horde of taller runners at the chaotic start would have caused considerable angst in previous races. Not today. She weaved through the traffic to make contact with the leaders, got in position during the first mile, and settled in.

“That first mile was fast, it felt like a track mile,” Tanksley said once she recovered from the doubled-over pain following the breathless conclusion. “The rest of the race was just guts. After that first mile, everyone spreads out and it’s just picking people off. I didn’t stick with the pack as much as I wanted, because they were spread out.“

In years past, Tanksley would have been the wallflower, content to blend into the horde. Not today. She has been convinced of her ability to track the frontrunners. She might be short, but she can run big. She crossed in 20:25.23, just 10 seconds off her career best on any course, quite a run considering the soggy condition of the course following overnight rain, and beat her projected finish.

“It took a lot of people telling me I needed to be up there,” Tanksley said. “Eventually I just did it.”

“She has more mental maturity,” BNL coach Jill Vance said. “That tough start didn’t throw her the way it might have two years ago. I was super nervous when she got boxed in. The question wasn’t whether she would get out or not, not panicking about that part, barring other catastrophes. But we had some goals. Today was all about positioning.

“Hopefully the training plan we’ve had her on has been designed to have her peak right now. It’s not that she couldn’t have run with them earlier, but there was no reason for her to do that. Now is when it matters. And her confidence, every since the conference meet, it’s the realization she can do it. And once you do it once, it’s so much easier. More stuff becomes capable.”

Now she’ll get her third shot at a trip to the state finals.

In the boys race, Bailey made a second-lap surge to secure his spot. He finished 28th overall in 17:54.00, earning one of the 10 individual spots reserved for non-team qualifiers, and he became the first BNL rookie since Logan Barrett in 2009 to reach the semistate.

Not bad for a guy who spent two weeks in virus quarantine and trained by himself (high noon, every day) during the preseason workouts. That 5K path near his Fayetteville home paid dividends as he worked his way to the top spot in BNL’s attack during the regular season.

“Strategy wise, it was just go out and see what you’ve got,” BNL coach Jon Calhoun said. “It was going to be a sprint the entire time. On the second lap, I told him he was 10th, and that really kicked his gear in. It’s a huge accomplishment, for the time and effort he put into it.”

Bailey passed five competitors on the way home to make sure of his placing.

“I needed it,” Bailey said. “If I didn’t get those people, I might have been close to not getting out. This was my goal. Coming into the season, I didn’t think I could get it. But here I am. It felt really good.”