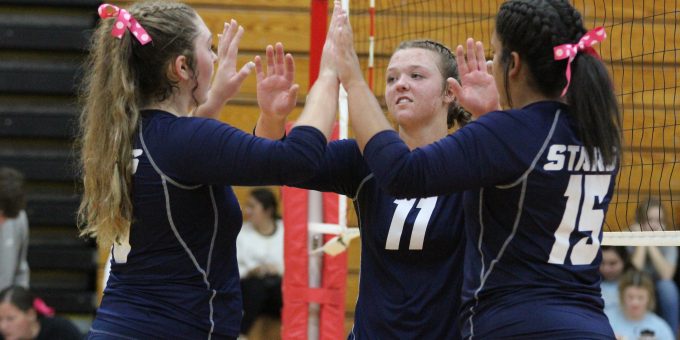 BEDFORD – What a shame, that Bedford North Lawrence’s best moments of the season came during the final homecourt appearance, that the high-quality, ultra-hustle performance in the last set still wasn’t enough to salvage a victory.

That’s a credit to Class A power Loogootee, which battled back from a six-point deficit to complete the three-set sweep in the regular-season conclusion on Thursday night. The Lions (23-7) absorbed BNL’s best, then scored the final 11 points of the match for a 25-17, 25-15, 25-19 triumph.

The gap in that final set was a misleading indicator of the fight BNL (3-16) showed, of the electrical surge that powered the Stars to a 16-10 lead and sent some shocking tingles through the Lions. But from 19-14, BNL’s hitting accuracy and communication waned, and Loogootee’s Brooklyn Summers served out the match. Momentum is a brute beast to conquer.

“We really needed them to lose a little momentum, but from the first set to the third we really picked up energy,” BNL coach Gabrielle Arthur said. “That last set was probably the best volleyball we’ve played all season. It was really good. Everyone really focused on doing their job. When we do that, we can win games.”

Loogootee dominated the first set, then went on a scoring run midway through the second, recording 9 points during a 10-point span to take a 14-7 advantage that was too much for the Stars (who were guilty of five service errors) to erase.

In the third set, BNL displayed its true firepower and some character grit. Annie Waggoner scored on a push shot, Carlee Kern hammered down a kill, Camryn Anderson tipped down another point, Kern cracked a kill, and Emma Foreman delivered a service ace for the six-point advantage. Maddy Bennett mishit a spike off the top of the net that fell to the floor, giving the Stars their 19-14 lead. They seemed on their way to a fourth set.

Not so fast, friends. Summers stepped to the service line, and winter fell on the other side of the court. Loogootee seized momentum during a long rally – a scintillating point featuring multiple diving saves and blocks at the net that sent ripples of appreciation through the stands – that finished with a point for the Lions. They never surrendered it.

“We were content with just playing, we weren’t getting our feet to the ball and really hustling after things,” Loogootee coach Shelly Lengacher said. “When they finally decided they were going to play, they came back and played pretty well. We’re starting to show a little more mental toughness. We need that going into the postseason.“

BNL, which drew a first-round bye in the Class 4A sectional at Martinsville, will now be idle until Oct. 16.

“We’ll rejuvenate and focus,” Arthur said. “Taking a couple of days to sit will be good. Having the first game of the sectional on a Saturday is different. It’s a long time off. But we will be to able to focus on things, sit and evaluate. I think it will go well.

“This group of seniors has worked so hard. From the beginning of spring, they’ve just been giving 100 percent. We also missed seven games (during a virus shutdown), which is a lot of momentum we could have built. I don’t think any of them were to the point they were ready for season to be over and didn’t want to be here.”

The Stars will await the Columbus North-Martinsville winner in the first semifinal at 11 a.m.