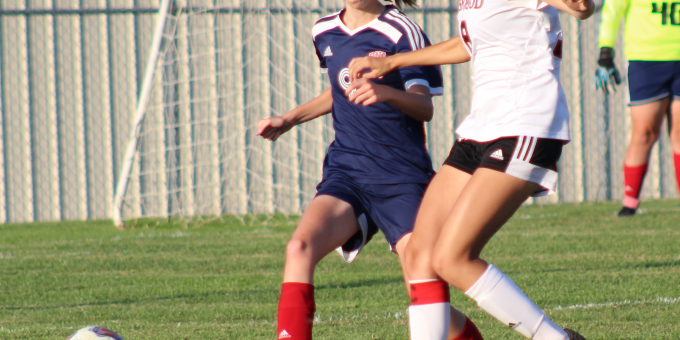 BEFDFORD – The broken vinyl record kept skipping and repeating the same scratched line – Bedford North Lawrence was short-handed. Only this time, Edgewood – in the spirit of sportsmanship and grace – decided to even the odds.

With only seven defenders and a goalie available, the Stars were three shy of filling the field. The Mustangs had every right to take advantage of that, and the result would have been a devastating blowout benefitting neither team. So Edgewood coach Brittany Tucker elected to play only eight, matching the Stars in soccer’s version of 7-on-7 football. And still cruised to a decisive victory.

Carly Sherfield scored twice as Edgewood (10-3-0) rolled to a 5-0 triumph on Monday afternoon. The Stars (0-11-1) managed only one shot, while the Mustangs rifled 21 shots and would have had more goals but for the extraordinary work of Crystal Webb in goal. Most of Edgewood’s shot were breakaway runs, a one-on-one battle between Webb and the shooter. Webb won a lot of those, but couldn’t turn aside all.

Injuries and illness cost BNL a full squad, and the open space allowed the Mustangs to use their speed and athleticism to create opportunities.

“”It seems like we just can’t catch a break,” BNL coach Jackie Dufresne said. “It’s tough to keep coming out in this continuous pattern.

Edgewood got on the board at the 37:00 mark of the first half. Claire Sherfield floated a shot from the right wing over Webb’s outstretched hands and into the left corner of the goal. Carly Sherfield got her first, banging home a rebound after Webb made a deflecting save on her first shot, at 34:43. The Mustangs took a 3-0 lead to the half with Emma Edwards flicking a left-footed chip home at 18:07.

In the second half, Carly Sherfield connected at 31:44, and Maeve Bergan scored the final goal with 2:38 left.

BNL’s only chance came in the first half when Emily Zhang was awarded a free kick from the top of the penalty box. Her blast was smothered and turned away. Edgewood, even playing at even strength, controlled the rest of the possessions. Rules state a team must have a minimum of seven on the field, and the Stars were able to do that.

“BNL is having a rough season, and we just wanted to make it a ballgame,” Tucker said. “It’s no fun to have three extra people out there.”

The Stars will conclude the regular season at North Harrison on Saturday, then compete in the Class 3A sectional at Jennings County, facing Floyd Central in the second semifinal on Oct. 7.