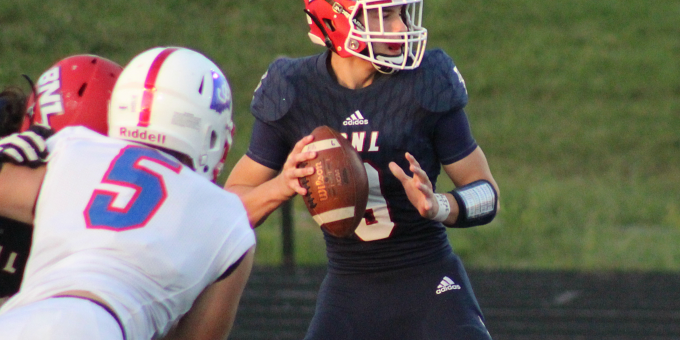 BEDFORD – Bedford North Lawrence crowned a king, although he didn’t want to wear it, and queen, because that’s what happens on Homecoming. If anyone deserved a few stars in their crown, and wore it well, it was Dylan Nikirk.

Motivated after misery, Nikirk was electric, lighting up Jennings County’s defense from all angles while sparking the Stars to a super-charged victory. His invisible airwaves crackled with life, he bristled with pent-up energy. Jennings County suffered when he released his emotional feedback.

Nikirk scored three touchdowns, caught six passes for 175 yards, returned a kickoff 80 yards – he did everything but kiss the queen as the Stars zapped the Panthers 47-14 on Friday night, capping the festive week with their best offensive display of the season. Memphis Louden threw for 277 yards as BNL (3-3 overall, 3-1 in the Hoosier Hills Conference) won its second straight game.

His first touch was a touchdown, his next-to-last touch was a score, and everything Nikirk touched in between turned to gold. Midas, that kid was. His best-friend connection with Louden resulted in two quick touchdown passes in the first quarter, setting the tone for the blowout.

“I think he was a little fired up,” BNL coach Derrick Barker said. “That’s good. He’s a kid that’s capable of doing that any night. With the ball in his hands – running the ball, throwing him the ball, returning the ball – he’s another kid who can do a lot of things and he’s really good at all of it.”

“I was looking forward to it a lot,” Nikirk said. “I missed it. We’re just glad to be back out there.”

Sitting is not his forte. Running is. He streaked 59 yards with his first reception, snagged a 35-yarder for the second score, and added a 30-yard touchdown run in the second half. Zane Anderson scored twice as BNL’s dynamic attack, with multiple weapons firing and inflicting damage, tore up the Panthers.

“Offensively, it was a great performance,” Barker said. “That was probably our best performance of the year, overall execution. It was good to see.”

Seeing Nikirk and Louden in action was the best. They have a bond. Friends off the field, Nikirk is now Louden’s first look.

“It’s good to have him as my quarterback,” Nikirk said. “I just get open for him and he gets me the ball. We have a connection. He knows what I’m running.”

Evidently the Panthers did not know what he was running. He added a juggling circus catch for 37 yards in the second half, often something so simple. Just run past the linebacker on a vertical route and look up. Here came the football.

“I can really trust him, depending on the play call,” Louden said. “If I see something I like, I always know he can make the play. It set the tone for the whole game, showed us what we were going to do.“

After the quick-strike start, BNL went up 21-0 following a diving interception by Lyrik Baker, who wrestled the ball away from the Jennings receiver at the 29. Louden scampered for 17 yards around the right side, stepping out of bounds before his dive toward the corner, but Anderson capped the short drive from 4 yards.

Jennings (1-5, 0-3) didn’t roll over to die. Peyton Hayden, a running back forced to take snaps, threw a beautiful 56-yard bomb to Carter Thompson for a stunning touchdown with 7:28 left in the first half. BNL answered that with a four-play, 66-yard march as Louden found Ryker Hughes for 30 yards and Grant Todd raced over from the 10. But Jennings caught BNL’s secondary for another explosive score as Hayden hit Colton Ross with a quick slant. Ross broke tackles, snaked through defenders and took off for a 72-yard score.

Nikirk’s 80-yard kickoff return set up Piaire Childs for a 9-yard touchdown as the Stars went to halftime with a 34-14 lead.

BNL dominated the second half. Nikirk raced 30 yards for a 41-14 lead, and Trace Rynders picked off an errant pass, returning the theft to the JC 34. Louden hit Nikirk with that look-what-I-grabbed pass to the 4 yard line, and Anderson rumbled over from there.

”In the second half, the defense played really well,” Barker said. “We answered well, we held them on fourth down a couple of times, and had the interceptions. And I finally had to tell them, let’s take the quarterback out of the game. Let’s make him hand it to somebody else. He’s a stud. We had to take him away.“

Hayden, to quote famous television announcer Keith Jackson, was “a hoss.” He ran for 116 yards, often pushing tacklers to the ground rather than going down, and threw for 168 yards. Once BNL’s secondary quit allowing deep routes behind them (Thompson caught 4 for 91 yards), Jennings went quiet on offense.

Louden was 13 of 22 overall as BNL came up one point shy of its biggest point total of the year.

“Memphis was really good, making good throws, good reads, running when he needed to, being smart and taking care of himself,” Barker said. “We knew we would have some shots deep. Dylan was the guy open. We had a lot of guys open, but he’s the one who got the ball and made the plays.”

“It’s a blast,” Louden said of the multiple-choice offense, with no real wrong answers. “Everybody is loving it, everyone gets it.”

BNL will chase its third straight win next week at Floyd Central.