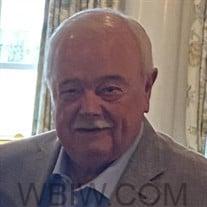 Jeffrey Norman Haas, 79, of Vernon Hills, IL and previously of Springville, IN and Seymour, IN, passed away on Sunday, September 19, 2021, at Glenbrook Hospital in Glenview, IL.

Jeff graduated from Seymour High School with the class of 1960.  He was a proud Marine and Mason.  He was a loving Father, doting Grandfather, and a stranger to none.  He will forever be known as our hero and a man of substantial honor.  Jeff retired from NSWC Crane as a criminal investigator.  Prior to his work at Crane, he was a funeral director at Burkholder Funeral Chapel in Seymour and McKee Funeral Home in Garrett, IN.

He was preceded in death by his parents; his wife of 49 years, Sharen L. Haas; a daughter, Jennifer Sue Haas; and one sister, Justine Barnett

Memorials may be given in Jeff’s memory to the VFW/American Legion or the Boys and Girls club through Burkholder Chapel.