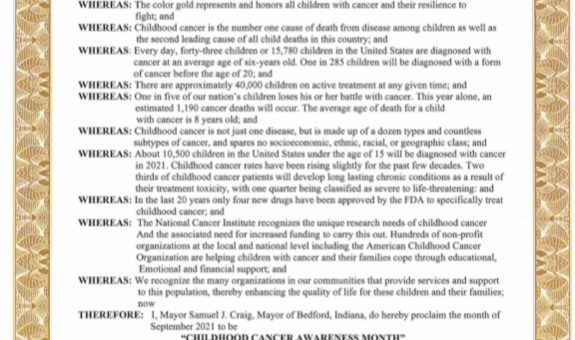 The color gold represents and honors all children with cancer and their resilience to fight.

In the United States in 2021, an estimated 10,500 new cases of cancer will be diagnosed among children from birth to 14 years, and about 1,190 children are expected to die from the disease. Although cancer death rates for this age group have declined by 65 percent from 1970 to 2016, cancer remains the leading cause of death from disease among children. The most common types of cancer diagnosed in children ages 0 to 14 years are leukemias, brain and other central nervous systems (CNS) tumors, and lymphomas.

The causes of most childhood cancers are not known. About 5 percent of all cancers in children are caused by an inherited mutation (a genetic mutation that can be passed from parents to their children).

Most cancers in children, like those in adults, are thought to develop as a result of mutations in genes that lead to uncontrolled cell growth and eventually cancer. In adults, these gene mutations reflect the cumulative effects of aging and long-term exposure to cancer-causing substances. However, identifying potential environmental causes of childhood cancer has been difficult, partly because cancer in children is rare and partly because it is difficult to determine what children might have been exposed to early in their development. More information about possible causes of cancer in children is available in the fact sheet, Cancer in Children and Adolescents. ( National Cancer Institue)

There are many types of cancer treatment. The types of treatment that a child with cancer receives will depend on the type of cancer and how advanced it is. Common treatments include surgery, chemotherapy, radiation therapy, immunotherapy, and stem cell transplant. Source: (National Cancer Institute).