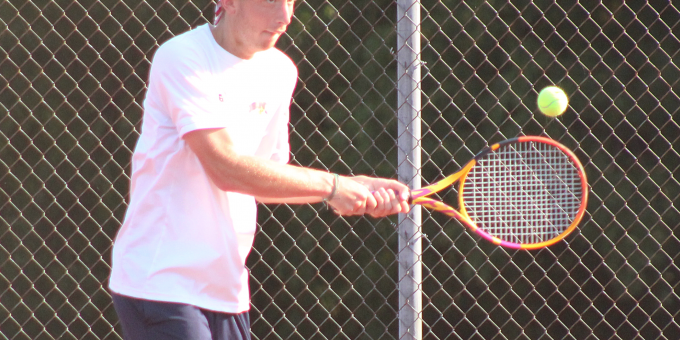 “I feel good because my play in the last set was solid and I didn’t make too many mistakes,” Graham said. “I’ve needed a win like this for a while now, and he’s a good player. So it feels nice.”

BNL also posted wins at No.2 singles, with Graham Turner cruising past Jacob Rose 6-3, 6-0, and No.2 doubles, with Nate Pemberton and Carter Kimmel smacking Nick Ingram and Japheth Webb 6-1, 6-1.

“The whole team played well tonight, and I’m really excited for the guys,” BNL coach Chris Kurtz said. “Steven is the one who came through at the end, claiming the final win.”

The Stars had to overcome some adversity. Caleb Jones, the normal starter at No.3 singles, is still sidelined by contact tracing, and Salem’s Sawyer Davis recorded a 6-2, 6-3 win over Gavin Baker in that slot. The Lions also won No.1 doubles when BNL senior Cameron Gratzer was forced to retire with an injury.

“With Caleb out again tonight, we put Gavin in at 3 and he did a nice job,” Kurtz said. “Early in the year, when we put in the same lineup, I could tell he was quite nervous, but tonight he just played tennis and it went well.

”Cameron is going to get some time off to recover, and we’ll have to figure out a plan for the next few matches, or weeks, in doubles.”

BNL will face Floyd Central in the first round of the Hoosier Hills Conference tournament on Monday.