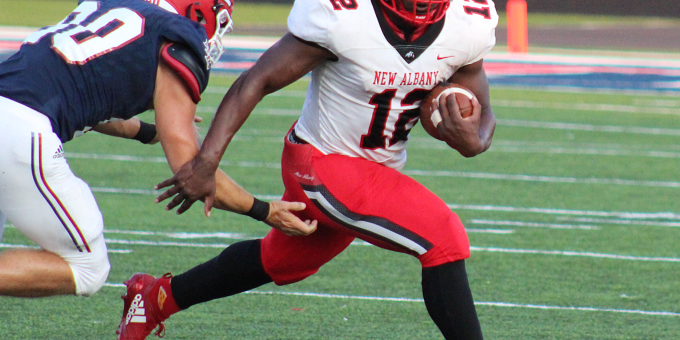 BEDFORD – The raw power, the constant pounding of sledgehammers, the crumbling of cement under the relentless barrage. Brute force, pulverizing and punishing. New Albany hammered away, breaking a powerless opponent – not by lightning strikes, but by old-fashioned muscle.

Advertised as a feared passing attack, New Albany unleashed its double-fisted fury with a bruising running game that ground Bedford North Lawrence into those same rubber pellets that comprise the turf. There’s no question now, the Bulldogs are the top dogs in the Hoosier Hills Conference.

With a ball-control style, with running backs Kyondre Winford and Myles Johnson doing the most damage, New Albany beat down BNL 27-16 in the showdown of the only two unbeaten league teams on Friday night. The Bulldogs (2-2 overall, 2-0 in the HHC) now control the conference race and earned the status of sectional favorite when the postseason begins in late October.

The Stars, seeking to seize the moment and take a huge step toward their first HHC title since 2006, were knocked backward, unable to keep the Dogs from dominating in all phases. New Albany’s yardage and time-of-possession advantages were staggering, indicative of superiority.

Winford, in beast mode, ran for 113 yards and a touchdown while quarterback Derrell Simmons scored twice. New Albany totaled an incredible 27 first downs, ran a grand total of 85 plays (not including those erased by 11 penalties) and ran roughshod over the Stars.

BNL (1-3, 1-1) paid much respect to the passing combination of Simmons and Ja’raylan Johnson, who ranked second in the state in receiving yards. He was not a statistical factor. But he was one of the few. DeJon Winburn caught 7 passes for 105 yards. Johnson totaled 87 rushing yards. On the opposite side, BNL’s dynamic offense was smothered until a late, meaningless touchdown softened the final margin.

“We knew that would be an ordeal,” BNL coach Derrick Barker said. “We couldn’t be so worried about the pass that we let them run it on us.

“We came out so flat. I don’t know if we hyped the game too much, if we were nervous. I would have thought it would be the opposite, a little too giddy to be in this situation. That was disappointing. We bottomed out.”

BNL was on its heels after it failed to convert a red-zone chance on the second series. New Albany stopped Zane Anderson on fourth down at the 1 yard line, then turned around to fabricate a 99-yard, 17-play drive that set the tone for what would follow. Simmons connected with Winburn for 29 yards during the devastating march, and Winford finished it, crashing over from 3 yards for a 7-0 lead.

The Stars answered with a 35-yard pass from Memphis Louden to Dylan Nikirk that set up Ryker Hughes for a 29-yard field goal, but the Dogs barked again with a 14-play, death-by-a-thousand cuts drive. Despite a flurry of penalties, which would be a theme in the second half, Simmons found Winburn twice for huge chunks, and Simmons slammed over from a yard out for a 14-3 advantage with 7:07 left in the half.

Following an exchange of interceptions, BNL established some momentum with a score, taking advantage of an unsportsman penalty to keep the drive alive. Louden scrambled away from pressure and scored from 9 yards as BNL went to the half with a 14-9 deficit. It seemed like more.

It would soon become more.

New Albany scored on the first two possessions of the third quarter to pull away. Simmons lofted a 26-yard strike to Winburn in the left corner of the end zone for a 20-9 lead, and his 38-yard dump-off pass to Winford highlighted the next series, which ended with a Simmons score from 3 yards.

The Bulldogs played keep-away in spectacular fashion. BNL had only two first downs in the second half until the final drive, which concluded with Louden’s 3-yard pass to Hughes with 6 seconds left.

“We tried to control the ball, keep them off the field,” New Albany coach Steve Cooley said. “Our defense came to play. Our defense is getting better. We made some key stops, their offense is good.”

The Stars have been good, but this performance didn’t meet that standard. Louden completed 14 of 31 passes for 128 yards with two interceptions, Anderson was limited to 64 rushing yards, and BNL was guilty of 12 penalties. Ouch.

Barker pointed to a bad practice that carried over to the field on game night. The Stars don’t have that margin of error.

“We struggled, a lot of mistakes,” he said. “Maybe a little too confident (after the impressive win over Jeffersonville last week). I want them to be confident, to believe in themselves. I don’t want it to be a thing where we’re too cocky or arrogant. But I don’t want them to not believe in themselves. And when the ball kicked off, there was some doubt, for the first time this year.

“We’ll regroup and learn from it. There s a good chance we’ll see them again in the sectional.”

New Albany now owns the outright lead in the HHC and will face an immediate challenge at Columbus East (which has won every league title since 2004).

“They’re the top dog in the conference. I don’t care if they lost,” Cooley said. “This will be one in the conference where anyone can beat anyone, back and forth, and you have to play well.

“You know what? We played well. That’s a good football team over there. Our line did a good job. We’re getting better up front. We had to control the nose guard and the middle backer. We put our best players there. We tried hard to control some things.”

BNL will look to bounce back when it visits Seymour (the Columbus East slayer) next week.