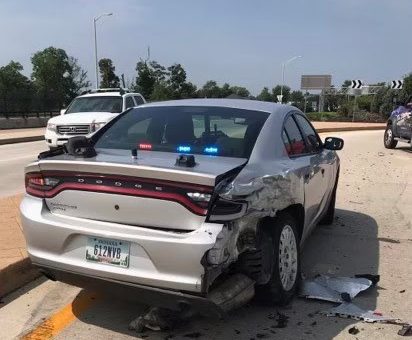 FORT WAYNE – Friday at approximately 12:30 p.m. while conducting a routine traffic stop on the Union Chapel Road overpass for I-69 in Allen County, a state trooper’s vehicle was struck by a passing motorist.

Senior Trooper Ben Kirk had a vehicle stopped in the west left lane on Union Chapel Road overpass, which lies between two roundabout intersections.  At the time of the crash, Trooper Kirk was out of his vehicle standing along the passenger side of the violator’s car speaking with that driver.  All red/blue emergency lighting on Kirk’s patrol car were displayed and operating properly.

A passing 2017 Dodge Ram pickup truck operated by 63-year-old Jerry Fulk, 63, of Fort Wayne, failed to yield while passing the traffic stop and crashed into the passenger rear side of the Dodge Charger patrol car.

Fortunately, Trooper Kirk and the other involved driver were not injured, and there was no collateral damage to the other stopped vehicle.  The crash resulted in heavy damage to both the patrol car and to the pickup truck.

Neither alcohol nor drugs were suspected as having contributed to this crash.

Fulk was issued a citation for failure to yield to an emergency vehicle under Indiana’s Mover Over or Slow Down law.  In Indiana, all motorists are required to yield to emergency vehicles working on the sides of our Hoosier roadways when emergency lighting is displayed to avoid the collision, either by reducing speed or changing lanes (when able to do so).