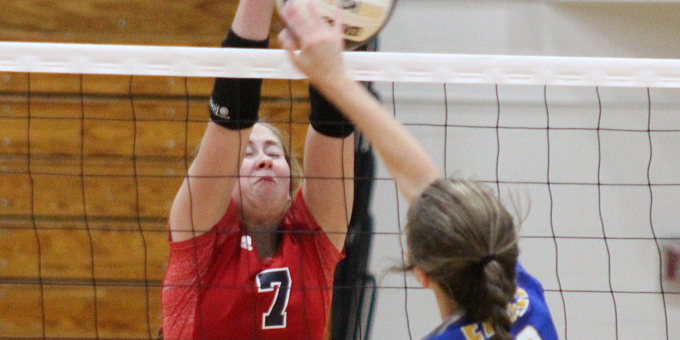 BEDFORD – Capturing momentum, such a crucial intangible in this unpredictable game, can be as difficult as herding cats. Which direction will it take? Will it be friendly or turn and claw? And it could betray with a sneer of indifference.

Bedford North Lawrence had perfect timing in its quest to make momentum an ally rather than an enemy in the home opener against Brown County, rallying late in each victorious set for a four-set triumph on Thursday night.

The Stars trailed in each set they won, lost a significant advantage in the one they lost. Go figure. Explaining the wild swings and crazy shifts could drive many over the edge of sanity. But after struggling in the 2021 debut at Mitchell, BNL was willing to take any avenue to victory.

When the dust settled, the Stars (1-1) had a tough 25-23, 25-23, 24-26, 25-21 win. Seniors Carlee Kern and Maddy Bennett were the sparks, especially in the closing moments of each set. BNL battled back from a 20-14 deficit and won the final two points of the first set, trailed 23-21 and won the final four points of the second, and came up with three big kills to close out the final set. Perhaps leading isn’t all it’s cracked up to be.

“We were really scrappy,” BNL coach Gabrielle Arthur said. “That was a hard-hitting team. Not every single point was beautiful on our end, but we kept the ball alive. We’re tying to get back in the mindset, when the other team is tired, that’s when we take advantage.

“We really needed a reminder of what winning felt like after Tuesday (and the loss to the Bluejackets). We were pretty down. This reset the tone for the season.”

Brown County (1-1) also knew how to battle back, erasing a 20-14 lead in the third set and winning the final two points when the Stars got a little rushed and flustered with net errors. But they were poised in the last set as kills by Kern, Bennett (both from sets by Annie Waggoner) and Reva Tincher (off a BC blocker at the net) closed out the victory.

“We try to stay positive, even when things aren’t going well,” Bennett said. “We had teamwork, better communicating. We had a lot of nerves on Tuesday, but we were ready to play today. Winning was big. We need that momentum, that encouragement.“

”Maddy had a phenomenal night, her digs and kills are really on,” Arthur said. “Carlee connected well with Annie, and Hayley Davis was on it on defense.

“Something we need to work on is not getting down. We get down and it seems like we’re fighting back the whole time. But we did a really good job of fighting back. Once we had that momentum, we really ran with it.”

BNL will host Bloomington North on Saturday at 10 a.m.