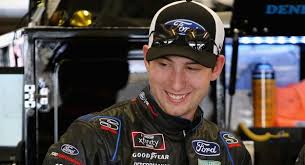 BROOKLYN, MICH. – Chase Briscoe and the No. 14 Rush Truck Centers/Cummins Ford Mustang team for Stewart-Haas Racing (SHR) head to the Irish Hills for the 25th points-paying race of the NASCAR Cup Series season.

Briscoe will make his first Cup Series start at Michigan International Speedway in Brooklyn during Sunday’s FireKeepers Casino 400. It will be his third overall NASCAR national series start at the 2-mile oval.

While it has been two years since Briscoe last visited the track, he has plenty of experience to tap into as he has never finished outside of the top-10 there. In his lone NASCAR Xfinity Series start in 2019, Briscoe started 14th and finished seventh. Additionally, he finished ninth in his only NASCAR Camping World Truck Series start there in 2017, and second in the 2016 ARCA Menards Racing Series event.

“It was really cool for me to lead laps at Indianapolis in a Cup race and run up front around guys that have won tons of races in the Cup Series,” said Briscoe. “My rookie season has been trying, and NASCAR is a humbling sport. It’s hard to come into a rookie season with this no-practice deal but, at the same time, you come into a new series and you always kind of question yourself if you belong here or if you deserve to be here if you can do it at this level. This year has been hard from a results standpoint and you second guess yourself along the way. You have your ups and downs and it’s in the downs that you get down and out, sometimes. But it’s good to go and have a run like that and give me the confidence to know that I’m capable of doing this and I can run up front with these guys. We need to do it on a more consistent basis but, when we do it right and the car is good and we make good calls, we are capable.”

Now Briscoe will go from a road course to a 2-mile speedway.

“If I do end up in front at Michigan, I know I can run with these guys,” added Briscoe. “I don’t have a ton of experience racing Martin Truex Jr., or these other guys who run up front every week. I don’t know their tendencies in certain situations, what they do and how they race. Now, if we get up there, I understand a little more how they’re going to run the restarts and protect their line. The 550 (horsepower) package hasn’t been our strong suit, but it’s a big weekend for Ford and we want to perform well. So, like I’ve said before if we can hit all those things right, we are capable of running up front and that’s what we’ll try to do.”

Longstanding SHR partner Rush Truck Centers returns to the No. 14 Ford Mustang alongside Cummins for Sunday’s event. All of the SHR cars travel from race to race in haulers from Rush Truck Centers, the premier service solutions provider to the commercial vehicle industry. Those haulers are supported by RushCare, which helps customers find the nearest Rush Truck Centers location, provides service concierge and technical support, schedules mobile service, dispatches roadside assistance, and more. Rush Truck Centers is the largest network of commercial vehicle dealerships in the United States with more than 100 locations across the country, and it takes pride in its integrated approach to customer needs – from vehicle sales to aftermarket parts, service and body shop operations, plus financing, insurance, leasing, and rental, as well as alternate fuel systems and other vehicle technologies.

With 24 races complete in the Cup Series season, Briscoe is 22nd in the driver championship and leads the Rookie of the Year battle by 190 points over Anthony Alfredo.