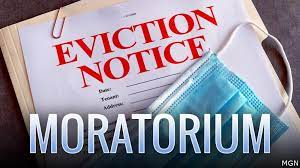 WASHINGTON, D.C.- Representatives Jim Banks (IN-03), Doug Lamborn (CO-05), and 31 of their colleagues sent a letter to President Biden and the Centers for Disease Control and Prevention. The letter lays out concerns over the Executive Branch’s authority to extend the CDC’s eviction moratorium order.

Recently, the United States Supreme Court warned that a further extension of the ban would exceed the agency’s authority. In addition, White House Press Secretary Jen Psaki stated that the CDC does not have statutory authority. On August 3rd, President Biden admitted this as well.

“Democrats have used the pandemic to restrict businesses, regulate Americans’ clothing choices and health decisions, and even change voting laws without the consent of state legislatures,” said Rep. Banks. “The eviction moratorium is just the latest example of the Biden administration using coronavirus to justify unconstitutional actions. It’s no mystery why Democrats are so hesitant to return to normal. That would mean following the law.”

“I am deeply concerned with the power of federal bureaucrats who have burrowed into federal agencies,” said Rep. Lamborn. “After failing to garner enough support in the House of Representatives, the CDC unilaterally expanded an eviction moratorium that even Joe Biden admitted the agency did not have the power to expand. Today’s letter sends a message to the administration – we will hold them accountable if they continue to violate the law and bypass the legislative branch. I am grateful for the support of my colleagues on this important issue and hope that the Biden Administration will rescind the illegal CDC eviction moratorium.”