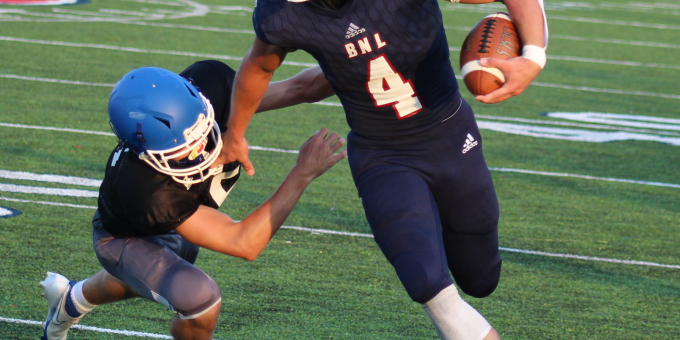 BEDFORD – The adage, quoted by every coach from Knute Rockne to John Madden to Bill Belichick, probably dates back to the birth of the forward pass. “If you’ve got two quarterbacks, you’ve got none.” Bedford North Lawrence hopes to prove it can be done.

The Stars will start the 2021 campaign with two quarterbacks splitting time in charge of the offense, a novel approach that bucks convention, when they visit Martinsville for the season opener on Saturday. Veteran senior Brye Lewis and sophomore Memphis Louden, who divided playing time in the scrimmage against Mitchell last week, will continue to share the spotlight as BNL seeks a historic victory.

Lewis returns to the position he owned last season, when he rushed for a team-high 865 yards and 11 touchdowns. He also completed 43 of 95 passes for 573 yards (7 interceptions, 5 TDs) while earning All-Hoosier Hills Conference honors. Louden has matured into a multi-purpose threat as well, and first-year coach Derrick Barker plans to unleash the double-barrel attack.

“They’re both going to play. I couldn’t say right now which one will start the game,” Barker said. “They both do some different things, they both do things we like and will try to utilize. It’s not like we have to change the offense from one to another. They both fit in with what we want to do.”

That gives the Artesians more to prepare for – like they haven’t have enough headaches the last two weeks. Martinsville was shut down by COVID contact tracing following its intrasquad scrimmage, forcing the entire team to the sideline for 10 days and the cancellation of the IHSAA-sanctioned scrimmage with Columbus East last week. The opener was shifted to Saturday to allow Martinsville to record the mandated number of practices before a contest.

“It hurts us to some degree,” second-year Martinsville coach Brian Dugger said. “The good thing is we had a good winter, spring and summer. We got better at what we do. But any time you take time off, you’re not going to be as crisp. We missed six practice days.”

“If the kids want to be remembered for something, leave a mark on the program, that would be a great way to do it,” Barker said.

BNL has cemented its other starters and its depth chart following the scrimmage against the Bluejackets. Zane Anderson will be the main force at running back, receivers Kole Bailey, Grant Dalton and Dylan Nikirk will be primary targets, and the offensive line will feature Nic Mansker, Isaac Jackson and Kline Woodward.

The opposite side, where BNL needed the most improvement from recent years, could come of age after four freshmen saw action last season. Senior captain Jake Terrell will be a key in front, linebackers Tyson Patterson, Ryan Perry and Kaedyn Bennett will headline a deep secondary, while returning starters Maddox Ray and Colton Staggs will be top defensive backs.

They will face a challenge from the Artesians, who return Tyler Adkins at quarterback. He started the final five games last year, and he has four veterans up front to protect him. Martinsville lost rushing leader Tyler Cox (who ran for 142 yards and two TDs against BNL a year ago) but will rely on a committee to replace the departed.

“Adkins has a big arm,” Barker said. “He can throw it anywhere on the field from almost anywhere. He will be a weapon we have to stop.”

“He doesn’t look the part, he looks like an eighth-grader,” Dugger said. “What he really is for us is a coach on the field. He totally gets it. He’s pretty close to an extension of me.”

Martinsville added another factor when it hired former BNL head coach Steve Weber for the assistant staff. Weber guided the Stars for eight seasons and went 33-48 during his tenure. He can definitely relay a lot of information about his former team.

“The biggest thing is we know they will be well coached with him on the sideline,” Barker said of his former boss. “But he’s not going to make any tackles or throw any passes. We have our hands full with the 11 guys on the field.”

Martinsville was fortunate to escape with last year’s win. Lewis ran for 102 yards and a score, but BNL’s final two drives ended with interceptions. BNL was guilty of four turnovers and 11 penalties, setting the tone for a 2-7 season that ended prematurely when positive COVID tests forced the team to withdraw from the postseason.

“We were able to get one from them last year,” Dugger said. “They had every opportunity to win that one, so they’ll be hungry coming back. They were tough nosed and physical, and I don’t think that will change. I expect them to be ready.”

If the eight-score explosion against Mitchell in the scrimmage counts for anything, BNL should be prepared. Getting off to a successful start cannot be overstated.

“I think we are,” Barker said. “The kids are excited. We’ve had a good week and we get that extra day of practice. Energy has been high. It’s huge. We want to get off to a fast start, build that confidence that we can play with these guys, that we can win the game.

“I was really pleased with the mental execution after those first three or four plays of the scrimmage. We didn’t mess up as much as I expected. The effort, the intensity, the physicality was great. We would love to see that every day.”

Last meeting: Last year at BNL, the Artesians escaped with a 13-7 victory, ending BNL’s final two drives with interceptions. Tyler Cox ran for 142 yards and two TDs for Martinsville. Brye Lewis ran for 102 yards and a score for the Stars. BNL was guilty of 4 turnovers and 11 penalties.