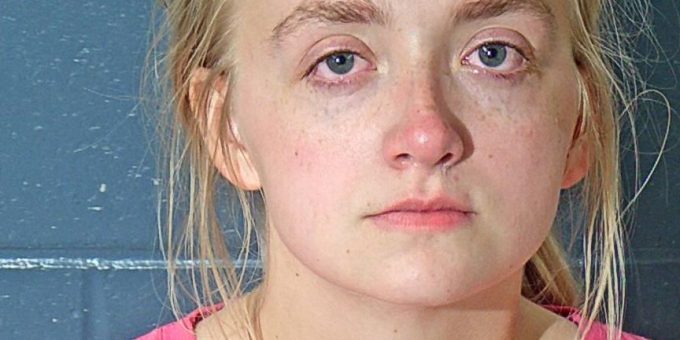 MITCHELL – A Bedford woman was arrested Friday after a Mitchell Police Officer stopped a red Pontiac with no license plate.

While speaking to the driver 19-year-old Jenna Blackwell, the officer noticed the odor of burnt marijuana coming from the vehicle. The officer said Blackwell was nervous.

Blackwell was asked if she had anything illegal in the vehicle. Blackwell admitted to the officer she had smoked marijuana earlier that day. The vehicle that Blackwell was driving was then searched.

In the vehicle, an officer found a cut straw underneath the driver’s seat with meth residue on it. Blackwell claimed the found straw did not belong to her but was her friends. She was then detained. Blackwell then told the officer she had a baggie of meth in her underwear. Again she told the officer it was not hers but she was holding it for a friend.

Blackwell again denied the found items belonged to her and stated she was holding them for her friend.

She said the Gabapentin pills belonged to her mother and sometimes takes them for her own back pain without her mother’s knowledge.