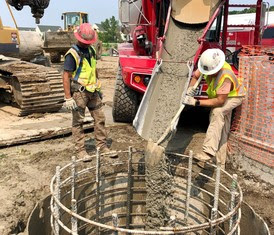 INDIANA – Motorists need to prepare for more traffic changes with another shift of local traffic on State Road 37. Local traffic was recently shifted onto new pavement and bridges on S.R. 37 from S.R. 144 to a crossover south of Henderson Ford Road in Morgan County.

Work has already begun to rebuild and rehabilitate the old northbound lanes in this area.

Now it’s time to repeat the process for the segment from the crossover south to the S.R. 37 closure at Morgan Street. Southbound traffic is scheduled to shift first, starting on or after Tuesday. This shift will also mean some temporary changes for access to Twin Branch Road.  Motorists will no longer be able to turn left from southbound S.R. 37 to Twin Branch. Full access to Twin Branch Road is expected to close late this week. The temporary closure is expected to be in place for about two weeks.

Northbound traffic will follow late this week or early next week after temporary concrete barriers are moved. S.R. 37 will remain two lanes – one in each direction – for local traffic in this area. Through traffic should continue to use the S.R. 144, S.R. 67, and S.R. 37 detour.

Concrete paving on S.R. 37 is continuing as is asphalt paving in numerous spots in the project area including Southview Drive and Gardner Avenue. Watch for flaggers, slow down in the area, and stay alert.

Road crews shifted S.R. 252 traffic late last week onto the new pavement near S.R. 37 and Hospital Drive to the west. This will allow work to progress on new roundabouts where I-69 entrance and exit ramps will connect.

Stay alert for an S.R. 37 traffic switch next week north of Olive Branch Road. The new traffic patterns will make Olive Branch right-in right-out only with no left turns or through traffic at S.R. 37. Watch for possible daily lane closures in the area.

Huggin Hollow Road north of S.R. 144 is expected to close mid-week. Access to the gas stations and storage facility will be maintained from S.R. 144. Properties to the north will use Old S.R. 37 to head south on Huggin Hollow.

Fairview Road is scheduled to close east of S.R. 37 for waterline installation. Weather permitting, the full closure will be in place from 7 p.m. Wednesday to 7 a.m. Thursday. Message boards will be placed notifying motorists of the closure and the need to seek an alternate route.

Short rolling closure of S.R. 37 is scheduled around 3:30 a.m. Thursday to remove an electric line near Fairview Road.

Stay on alert and watch for truck traffic entering and exiting the construction zone. Be sure to slow down in the area.

Crews are getting closer to the first of two bridge replacements this year over I-465. The Mooresville Road Bypass bridge is scheduled to close the week of August 16 and will be closed for about three months. The Keystone Avenue bridge closure is expected to follow a week later and last about four months.

There’s a new traffic signal at Fairview Road and Bluff Road. It will be activated soon and will initially be a 4-way stop with a signal flashing red in all directions.

Thompson Road between Stoops Freightliner and Warman Avenue is expected to close permanently in early September. Access to the Sunshine Gardens neighborhood will be from Epler Avenue.