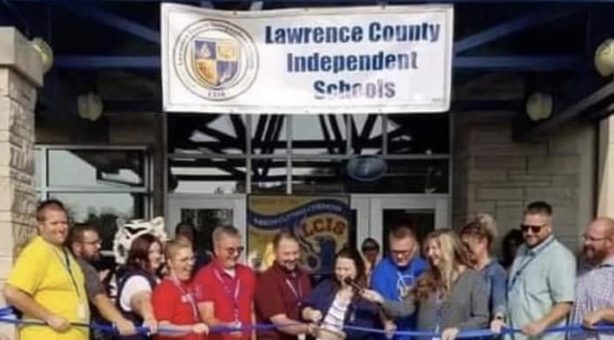 Several individuals were on hand to celebrate the success of opening the school within just 16 months of the announcement of the closing of the rural western Lawrence County School.

Indian Creek Township officials, Indian Creek Volunteer Fire Department, along with many community members were among the attendees. Storm the mascot from Trine University, along with members of Education One, were all part of this historic moment for LCIS.

New students, officials and family members enjoyed cake and punch while they had the opportunity to meet the teachers. All attendees were also able to take a first-hand look while touring the facility.

This is just a time for us to soak this in, and relax following the six months of long nights of painstaking work,” said Chad Shock, vice-president LCIS.

School officials are ready to move forward to provide the community with educational opportunities that will lead to the success of future careers for their students.

On Tuesday morning, the school was filled with cheering students as the principal Joanne Symcox readied herself for an exciting school year of exploring new things and learning.

The school passed all required inspections including the final health and state fire marshall inspection which were completed Monday afternoon.

“I was such a pessimist to see us being able to pull this all off, I think Chad Shock maybe about halfway through turned me into an optimist,” said Trisha Turner president of the LCIS board.

A total of 307 students will be attending the first day of school, Tuesday morning with four buses making their rounds throughout Lawrence County at designated bus stops. There will probably be s few hiccups along the way, and especially on the first day of school. At this time about 150 students will be taking advantage of the bus option with the remainder of the students choosing to use their own transportation.

“We were disappointed that Springville closed, but Karalyn attended Needmore following the closure. We were not happy with the large classrooms. We are happy to be here in Fayetteville. I think this is a good fit for them. We just took a tour of the school and it looks amazing,” said Springville resident Ashley Bauer. Her daughter Izabelle will start kindergarten and her daughter Karalyn will be starting second grade.

“We had a lot of support from community members, local businesses, and many individuals throughout all of Lawrence County who worked behind the scenes. I would be scared that we would leave someone out, as many volunteered their time, and talents to see that this school was ready for the first day of school,” said Chad Shock vice-president LCIS.

Staff was still putting on the final coats of paint, touching up areas to make sure everything was perfect in appearance, both inside and outside the facility. The school was issued a $950,000 mortgage to help get the school’s immediate needs addressed. With a large number of students enrolled in the first year, the expansion of the school will have to be looked at in the next two years.

A total of 17 teachers working along side a team of support staff will be able to teach the traditional classes along with art, music, STEAM, and Physical Education. By the second semester, LCIS will hope more programs will evolve such as choir, adding band or orchestra, advanced physical education, and advanced art.

Robotics and Media programs are some of the other activities that have been made available for the students.

A committee has been working on the athletics portion of the school programming. A few fall sports are lined up and the bleachers are going to be installed in October. An installation of scoreboards and basketball goals will be completed prior to the arrival of the bleachers.

“We had this dream and this was a huge dream which we did not want to be a failure. We first started out with having two schools in mind, but we landed just the way we were supposed to. Everything fell in place just at the right time,” said Chad Shock. ” It has been less than six months since we got the keys. We have transformed it, hired the staff, and the remaining pieces just fell into place at the right time.”

Indiana Charters also partnered with the school to assist them with payroll execution, financial assistance and grants writing.

Security measures are in place to ensure the school facility, faculty and students are protected the students each day. The members of the public will not be allowed to enter and exit the school until they are screened through the front office. Cameras have been installed throughout the facility.

“We like to have community nights once a quarter, having a designated time where community members can tour the facility and look at the student’s accomplishments down the hallways,” said Trisha Turner. “You start out on an endeavor like this and you think there is any way we are ever going to accomplish this. But then all of a sudden people just show up. They embrace you, take you on as part of your family and they realize you stay here until midnight and they feed you. You have a group of people that just all of a sudden ascend and help you reach the goal. So thank you to everyone.”