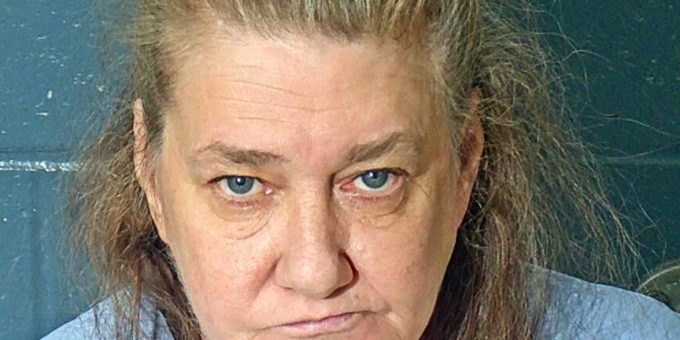 BEDFORD – A Bedford woman was arrested Monday after a warrant was issued for her arrest after an incident on Tuesday, August 3.

According to a probable cause affidavit on that Tuesday at 10:56 p.m. Bedford Police officers were called to a home in the 1610 block of R Street after a report a male had been stabbed.

The caller told police the injured male lived across the street and came to her door saying his wife had stabbed him.

When police arrived they found the injured male standing in the roadway bleeding severely from his wounds.

The male told police his wife 57-year-old Teresa Bray was still inside the house.

Officers entered the house and found Bray in a bedroom sitting on the bed covered in blood.

Officers detained Bray, who forcibly resisted the officers. She was escorted to a police car and had to be forcibly put in the vehicle. While in the patrol car Bray was able to slip one of hands free from the handcuffs.

The male was transported by an IU Health Hospital ambulance to St. Vincent Dunn Hospital for treatment.

“The victim was covered in blood from several stab wounds to the abdomen area,” said Chief Moore the day of the incident.

Bray told police she didn’t even know why officers were at her house.

She then told police her husband had “explosive anger” and he had picked her up by her neck earlier in the evening. However, she had no injuries to her neck. When asked what happened next, she told police she “just went off.”

When asked what happened she replied, “I don’t know”.

She said she and her husband were having a good time and laughing.

She told police she didn’t know how her husband got injured or where all the blood came from and denied stabbing him.

She was then transported to the Bedford Police Department for further questioning. Once there Bray complained she was unable to breathe and requested to go to the hospital. She was transported to IU Health Hospital for a medical evaluation.

Another officer went to St. Vincent Dunn Hospital and spoke to the injured male. He told police Bray had “just stabbed him” and he did not know what brought the incident on.

While Bray was receiving treatment at IU Health, ER staff advised that she was going to need further treatment and evaluation. It was determined she would be transported to IU Health Bloomington.

Lawrence County Prosecutor Samuel Arp was contacted and advised of the situation. Prosecutor Arp requested that this case report be generated and submitted for immediate review and filing of charges so that Bray could be taken into custody as soon as her treatment from IU Health was completed.