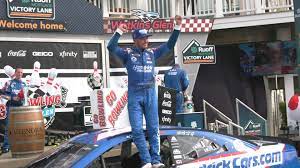 WATKINS GLEN – Kyle Larson of Hendrick Motorsports won the Go Bowling at The Glen to score his 11th career NASCAR Cup Series victory, his series-leading fifth of the season, and his first at Watkins Glen. His margin over second-place Chase Elliott was 2.43 seconds.

The HighPoint.com driver struggled with a loose Ford Mustang in turn three and took advantage of the lap-10 competition caution to pit for fresh tires, fuel, and adjustments. Briscoe restarted 28th on lap 13.

By lap 15, Briscoe had made his way to the 21st position. Two laps later he was called to pit road for a scheduled green-flag stop for fuel only.

The rookie driver rejoined the field in 25th and maintained that position until the completion of the first stage. When the leaders pitted at the stage break, Briscoe stayed on track and inherited the fourth position.

On the initial start of the second stage, Briscoe challenged for the lead into turn one but ultimately settled into the second position.

When the third caution of the race occurred on lap 26, Briscoe reported he was battling the same handling conditions but the changes made on his last pit stop had helped. He remained on track and restarted in the second position on lap 28.

As the end of the second stage approached, the HighPoint.com Mustang began to lose its rear grip on the exit of the corners. Briscoe slipped back to the fifth position as the stage came to an end.

The No. 14 driver elected to stay on track once again at the stage break and lined up fifth for the start of the final segment.

Briscoe restarted fifth for the final stage and was running there when crew chief Johnny Klausmeier brought the HighPoint.com Ford in for a scheduled stop on lap 57. The No. 14 received tires, fuel, and a chassis adjustment.

On lap 60, Briscoe was scored in 15th as leaders continued to make green-flag stops. He re-entered the top-10 on lap 65.

Briscoe held his position until the final lap of the race. As he came out of the final corner, he passed Ross Chastain for the ninth position to score his third top-10 of the season.

Briscoe earned his third top-10 of the season, and it came in his first career NASCAR Cup Series start at Watkins Glen.

Briscoe was the highest finishing NASCAR Cup Series rookie for the 19th time this season.

There were four caution periods for a total of six laps.

Twenty-four of the 37 drivers in the Go Bowling at The Glen finished on the lead lap.

Larson and Denny Hamlin are tied for the championship lead after Watkins Glen, each with 917 points. Their margin over nearest pursuer William Byron is 131 points.

“We’ve only got three top-10s now, but you’ll take any of them you can get, said Briscoe. “We ran up front a lot of the day but still weren’t quite good enough. I felt like earlier in the race I was a little bit better. And as the race went on, I don’t know if the other guys got better or we just got worse. Obviously, we’re in a position where we’ve got to go win, so ninth doesn’t necessarily cut it for us, but overall it was a good day. We got stage points and finished in the top-10, so we’ll go on to Indy. We know we’ve got to get it better if we’re gonna win one of these, and just from a balance standpoint I’ve still got to get better, too. We’ll go on to Indy and back home next week. Obviously, that one is super special, so we’ll try to capitalize there.”

The next event on the NASCAR Cup Series schedule is the Verizon 200 at the Brickyard on Sunday, August 15, on the road course at Indianapolis Motor Speedway. The race starts at 1 p.m. EDT with live coverage provided by NBC and SiriusXM NASCAR Radio.