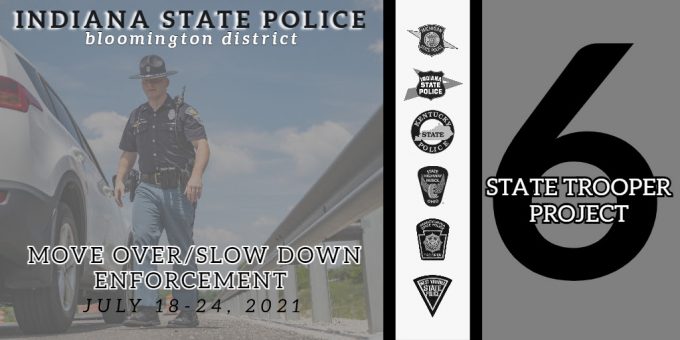 BLOOMINGTON– The Indiana State Police will be joining forces this week with Kentucky, Michigan, Ohio, Pennsylvania, and West Virginia State Police agencies, for what is known as the Six-State Trooper Project. During this collective effort, troopers across Indiana will be taking to the highways July 18th-24th with a primary focus on targeting drivers violating Indiana’s Move Over / Slow Down law.

During this period, motorists can expect to see an increased presence of troopers on the roadsides conducting traffic stops. Drivers are encouraged to not drive distracted, to be increasingly aware of the need to move over or slow down as required by state law, and to give your troopers room to work safely.

In 1999, Indiana was the first state in the nation to pass such a law requiring motorists to move to an adjacent traffic lane or reduce speed by 10 mph below the posted speed limit if unable to change lanes safely, when driving by a stationary police, fire or ambulance emergency vehicle stopped along the side of the road.

Motorists that observe reckless driving behavior, suspected impaired driving, or suspected criminal activity are always encouraged to call 911 to report such activity or call directly to the Indiana State Police Indianapolis Post at 317-899-8577 when safe to do so.