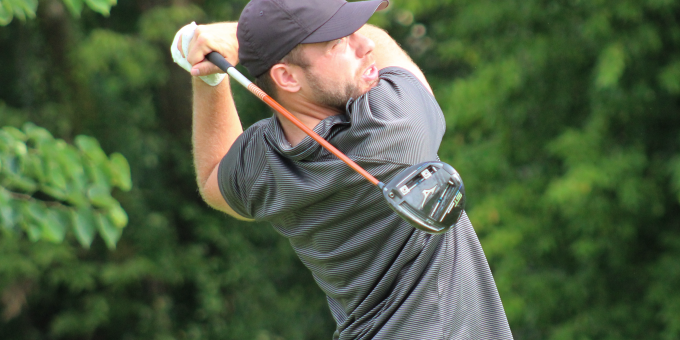 BEDFORD – On ‘Moving Day,’ when contenders make their move toward the top of the leaderboard, Jalen Hodges loaded the U-Haul and lugged his game into high-rent territory as he chases his first Bedford Men’s City Tournament title.

Hodges carded the third round’s best score, a 2-under 70 on Saturday, while climbing within two shots of frontrunner Trey Turner heading into the finale at Otis Park. Three-time defending champion Aaron Harrell remained in striking range, completing a terrific trio for a Sunday shootout with a trophy at stake.

Turner, looking to finish a wire-to-wire run to his second City crown, remained in control with a 2-over 74 that left him at 5-under 211, with Hodges (back-to-back 70s for his 213 total) and Harrell (1-under 215) poised to wrest the title away.

The stage is set for something special, even though Hodges persists in calling his game “boring.” There was nothing monotonous about his power move, with an eagle on the par-5 6th hole punctuating his round. He did all his damage – positive and negative – on the front nine, then carded nine consecutive pars on the back side.

“I’ve been playing some boring golf, fairways and greens, as basic as it seems,” Hodges said. “If I could get a couple of more putts to go in tomorrow, it will be pretty good.”

Hodges, a 2017 Bedford North Lawrence graduate who now plays for Bradley University, had birdies on the second and fifth holes, but his highlight came on the 6th, where he peeled a cut 3-wood second shot to 6 feet for his eagle. After a bogey on 9, he settled into par mode. And that’s not necessarily a bad thing for the guy who finished 22nd in the Missouri Valley Conference last season. He’s now in position to complete a life quest.

”Growing up here and playing golf here my whole life, it’s always been something I wanted,” Hodges said about the potential of a title. “Maybe I put too much pressure on myself. The older I get, I’ve gotten more mature. So I’m more chill out there. That’s the way you need to be.”

Of course, Turner is where everyone wants to be: in the lead, controlling his own fate. He posted four birdies in Round 3, but suffered more bogeys (six) than his characteristic game of smoothness and quiet style. He blamed ball striking for his bouncy tour.

“I didn’t strike it well, didn’t do anything too well,” said Turner, seeking to add a bookend to his 2017 championship. “I just had to grind it out, and I’m pretty pleased considering how bad I hit it. I just have to come back tomorrow and be prepared to strike the ball a little bit better.

“It was nice to roll in some of those putts (including a key birdie on 17 to establish momentum for the final round), so it could have been worse. I have to come back ready to go.”

Harrell posted his second straight 72 and did that with four birdies (three in the first seven holes to threaten the leader) and four bogeys (all within holes 9-16 as he gave back gained ground). He capped the day with a 25-foot putt (“The first one I’ve made over 8 feet this year,” Harrell quipped) for par on the 18th.

“I can’t putt at all,” said Harrell, although his record-setting scores in previous victories disprove that self-critical theory. “I know I can putt, but when you don’t play the short game is the first thing that goes. The feel goes first. So I’ll take it. I’ve had three good rounds.”

Ethan Stanley, who was one of the first-round leaders and was cemented in second place after 36 holes, started with a fortunate birdie (his tee shot soared over the stone wall on the first hole, then bounced back into play, and he ripped the approach to 3 feet) on the opening hole. But he suffered an attack of shank-itis late on the front nine and stumbled to a 78. He’s now 8 shots back, tied with Koby Robb and Zach Terrell at 219.

“It will be a fun day,” Hodges said. “Trey is an awesome guy, and you never know what Harrell will shoot. He can always go low.”

“I won’t have a score in my head,” Turner said. “I just want to play my game, play against the golf course and not worry about what they’re doing. I’ll do the best I can. It will come down to who is striking the ball the best and who makes putts.”