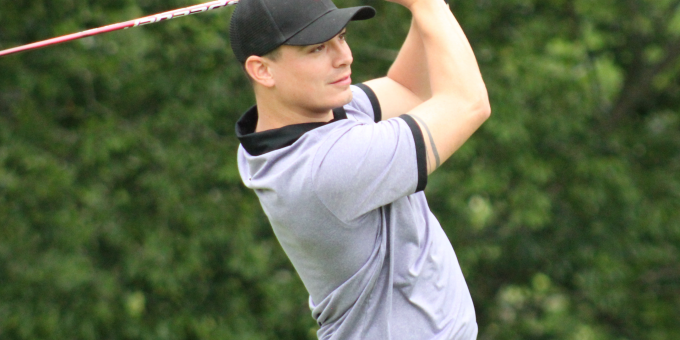 BEDFORD – Big-city traffic is a nightmare, with major roads constantly clogged by people in a high-speed rush to reach their destination. Going somewhere? Don’t get in a huge hurry, because a wreck could bring you to a sudden halt. That’s the first round of the Bedford Men’s City Tournament in a drive-by glance: gridlock at the top.

Topped by former City champion Trey Turner, three players took advantage of the soft, benign conditions on Saturday to card 3-under 69s and share the opening-day lead after the first tour of Otis Park. Three more carded impressive 1-under 71s. That’s a lot of red, just like the phone map warning of a bottleneck ahead.

Turner, who won his title in 2017, posted six birdies on his I-69 cruise, a number matched by former Bedford North Lawrence standouts Ethan Stanley and Koby Robb. The congestion on I-71 was created by three-time defending champion Aaron Harrell, former BNL ace Daylen Tidd, and Zach Terrell. Golf tournaments are never won on Day 1, but that sixsome definitely drove themselves into the contender lane for the next three rounds.

After Harrell’s dynamic dominance the last three years, this promises to be a race. Fasten the seatbelts, it could be a bumpier ride over the next 54 holes.

“There are some people at the top,” Turner said. “It will be a fun tournament. You can’t win on the first day but you can lose it. Obvioiusly there’s still a lot of work to do.”

Turner, playing his first competitive round in over 3 years, shook off first-hole jitters and went to work with three quick birdies over the first seven holes. He stumbled midround with three bogeys, then ignited again with three birdies in a five-hole stretch from 13-17. The most important shot of his day was the 15-footer for par on the first hole, which calmed his nerves and kickstarted his shift into birdie mode.

”I didn’t know what to expect,” said Turner, a 2014 BNL graduate. “I was pretty pleased with the way I played. I didn’t hit it that great but got around the course. I knew I was hitting the ball well enough to shoot a good score. I would have liked to have gone lower, but I’m just trying to keep it steady.”

Stanley, who has finished second in this event twice, is coming off shoulder surgery on Feb. 17. That injury, which ended his University of Indianapolis season, made him a mystery man, but he displayed old form and fire with an eagle (on the fifth) and four birdies (including a chip-in on the 7th) before a bogey on the final hole cost him the outright lead.

“I hit my driver terrible for the first half of the day,” Stanley said. “I wasn’t hitting the ball well and scrambling around. I was putting well and putting it in the right spots, taking advantage when I had chances.”

Robb became a factor on the back nine with a 3-under 32 on the second side, which normally takes back what the front surrenders. He didn’t card a birdie until the 8th hole, then exploded to conquer 11, 13, 17 and 18 with a furious fast finish.

“I played pretty solid, but the front nine I had to grind,” Robb said. “I had testy putts for par. I started hitting the ball great on the back nine, it was exciting for sure. The course played a little easy for how soft it was, you could get the ball to stop on the greens. And I stayed patient. That’s the biggest difference in my game now, I don’t stress out over every shot.”

Harrell, who is gunning for his fifth overall City championship, had a give-and-take day, carding three straight birdies on holes 5-7, suffering a penalty for a bogey on 15, bouncing back with birdies on 16-17, then dropping a shot on the par-3 18th.

“I’m very happy with my day,” Harrell said as he started his quest to join Gordon Jeffries (1950-53) and Michael Gratzer (2000-2004) on the short list of champions who won four in a row. “I played well, especially the short game. I was surprised the short game was so good, for not playing. I got up and down quite a few times.”

Harrell, who won his first in 2005, could also Don Gratzer (8), Ken Hackney (6), Jeffries (6) and Gratzer (5) as five-time winners. But there’s a lot of holes, and potential potholes, ahead to start that conversation.

Tidd’s 71 was solid, not spectacular, which is the reverse of his usual explosive game. He hit 15 greens in regulation but required 34 putts (with two birdies offsetting his lone bogey on 13).

“I felt like I should be the clubhouse lead with way I hit the ball,” Tidd said. “But I can‘t complain.”

Ken Steward and Jalen Hodges settled four shots back with opening 73s. The second round is scheduled for Sunday, with the final two rounds set for July 17-18.

“With three rounds left, you can’t look at things too far ahead,” Stanley said. “I’m very happy where I am, excited to have people at the top of the leaderboard. It should be some good competition. The last few years have been playing for second, but now we’ve got it figured out,. Aaron made us realize it’s not that hard. I’m glad to see so many people under par. It makes it a lot more fun.”