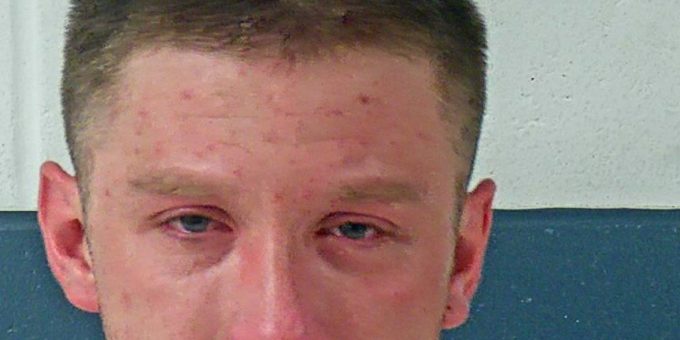 BEDFORD – A Bedford man was arrested on drug charges after Bedford Police officers were called to a home in the 1510 block of 12th Street after a complaint that someone was knocking on the back door of a home at 2:08 a.m. on Sunday.

When police arrived they found 30-year-old Michael Simmons in the backyard. He was intoxicated.

Officers also observed that Simmons had blood on the inside of his elbow, his shirt sleeves and fresh track marks on both arms, which police said was indicative of intravenous drug use.

Simmons told officers there were six people after him and they were following him around in their vehicles.

He told officers he ran for 10 blocks and after his phone died, he started knocking on doors for help. He could not give officers a reason as to why the people were chasing him.

He said one of the men threatened to kill him and chased him.

While speaking with Simmons, he identified two different vehicles that reportedly had chased him. However, he could not speak to what type of vehicles they were other than describing them as a tan or white car.

When asked about the blood on his shirt, Michael claimed the shirt did not belong to him and stated the blood was from him popping his acne.

Simmons consented to a pat down and pocket search. Officers found one identification card. However, Simmons claimed he had two additional identification cards while he was running. Officers searched the grounds and found them in the backyard. They also found a spoon with residue and a syringe that contained a liquid. Both the syringe and spoon tested positive for fentanyl.