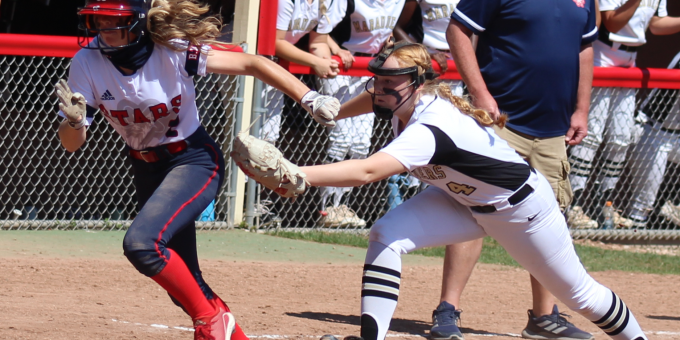 GREENWOOD – The tone was set quickly, rather ominous for such an anxious beginning and monstrous for the momentum it established, and Bedford North Lawrence could not flip that script. One key hit, one clutch swing, was the only difference in this nervous Class 4A semistate semifinal.

The Stars had first swings and wasted a phenomenal scoring chance. Mt. Vernon (Fortville) got a second shot and did not miss. And that first-inning shift cost BNL a chance to win its first semistate championship.

The Marauders scored twice in the first inning and made that count for everything during a tense 2-1 victory over No.8 BNL on Saturday. Mt. Vernon (23-5) advanced to the final against No.2 Roncalli, which shut down No.13 Columbus North 4-0 in the second semifinal.

BNL (28-5) got its run in the third on a opposite-field double by Annie Waggoner, but the Stars will rue the squandered opportunity to take control in the first. Runners on second and third, no out, a situation dripping with promise. The Marauders escaped that dangerous jam, then scored two in the bottom of the frame with two bunts and a long-ball double off the center-field field.

”We just didn’t get that key hit, and that’s the way it goes sometimes,” BNL coach Brad Gilbert said.

The first-inning scene was surreal. BNL’s Lauryn Anderson coaxed a lead-off walk, and Sarah Stone reached when MV first baseman Molly Buck dropped a short-range throw from her second baseman. BNL was poised for a quick strike, perhaps even a knockout blow.

But MV hurler Maddie Taylor rose to the occasion. The left-hander got Waggoner on a pop-up, and Brynlea Bennett bunted into a fielder’s choice as Anderson was caught in a rundown between third and home. Taylor struck out Braxton McCauley to end the major threat.

“If we get off to a better start, or if we get a hit, a key hit, we score anther run,” Gilbert said. “We just didn’t do it. You have to give her credit. She pitched a great game.”

The Marauders went small-ball to scuff up Waggoner in the bottom of the first. Riley Hasseld got aboard on an infield single to shortstop, with her speed winning the race with the throw. Then came the two bunts, the first by Macey Cox and the second by Haley Kissee, to load the bases.

MV’s Easton Wampler, a freshman, cranked a ball to deep center that surprisingly carried over McCauley and off the fence in center. Two runs scored, although the Stars cut down Kissee at the plate with a perfect relay from McCauley to Haley Deckard to Stone. But the damage was done.

“That first inning was interesting,” MV coach Veronica Kirby said. “We seemed more relaxed and prepared at the plate, and I thought ‘Hmm, this could get good real fast.’ But they’re a good team, and we knew that. We’re in the Final 8. Just to get here, everyone is going to be good.”

From that point, Waggoner (20-2 with a school record for wins in a season) was spectacular. She allowed only one other hit, striking out 13. All she needed was some offensive support. Ultimately, she was the one to provide it. With two outs in the third, Stone walked, stole second, and raced home on Waggoner’s double to right.

But after that, Taylor (12-2) got stingy. The only other BNL hit was Carlee Kern’s lead-off single to left in the seventh. The Stars threatened that last frame when pinch-hitter Carsyn Avery drew a one-out walk to move Kern into scoring position, but Taylor got Aliza Jewell on a called third strike and got Anderson – with Stone looming in the on-deck circle – to pop up to shortstop.

Taylor allowed four hits and struck out 7. Her defense was solid behind her after the early angst, although no one made a more sensational play than Jewell’s diving catch – on the infield dirt after a long run from her spot in right – in the fifth.

“Defensively, we played great,” Kirby said. “We played defense like a championship team needs to do.”

“I’m really proud of my team,” Gilbert said. “If you had told me we were going to strike out half as many times as they did, I would tell you we’d be on top. We just didn’t get that key hit. We didn’t take advantage of their nerves.

“I’m proud of the way we fought. We proved we deserved to be here. This is where we want to be, we want it to hurt a little bit.”

Roncalli reached the final as superstar pitcher Keegan Rothrock fired a two-hitter and struck out 15.