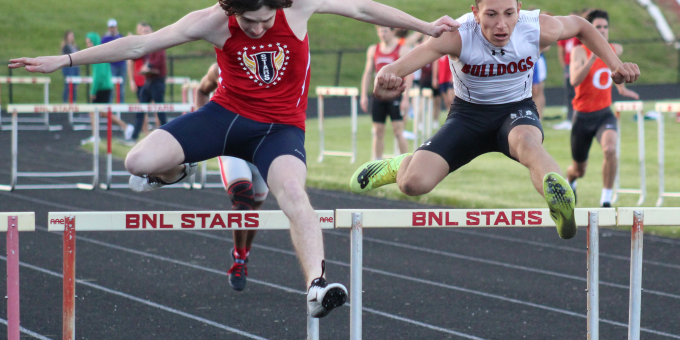 BEDFORD – For the final chapter of this edition of Bedford North Lawrence’s track, with construction of the new facility looming, James Underwood and Zane Thompson displayed some of their best at the last.

Underwood matched his career best while finishing second in the high jump, and Thompson ran a scintillating race in the 300 meter low hurdles, settling for third after the final lunge to the line during the Hoosier Hills Conference meet on Thursday.

BNL finished sixth in the team competition with 44.5 points. New Albany powered to the championship with 174.

Underwood was BNL’s top finisher, clearing 5-10 in the high jump. Columbus East’s Anthony Lloyd won the event at the same height, claiming the crown with fewer misses. BNL’s Coleton Sears was third at the similar 5-10 mark.

“The difference with my form has added six inches to my jump,” Underwood said. “His help is huge.

“We haven’t had a meet since last week, so I’ve had time to recover, time to get my legs back under me. I’ve worked on my steps a lot, and the time off makes a difference.”

Thompson was less than a step from victory. He was locked in a duel with New Albany teammates Xzavier Pruitt and Khol Brown in a step-for-step battle down the stretch. Pruitt won in 40.91 second, followed by Brown (40.94) and Thompson (41.25) in a photo finish.

“I kind of fumbled on the very last hurdle, lost a lot of momentum,” Thompson said. “If that didn’t happen, I could have gotten first or second.

“It’s not the best, but definitely better than it has been. I can only get better.”

“The effort was great,” BNL coach Brett Deckard said. “Our kids run hard, they compete. We knew these were the big boys.

“Isaac had a great night, he was the only one in three events. They didn’t back down. We’re so young, so I’m tickled to death.”

BNL, the usual host of the IHSAA boys sectional, will return to action next week in the sectional, which has been shifted to Jennings County as construction begins on the BNL project.