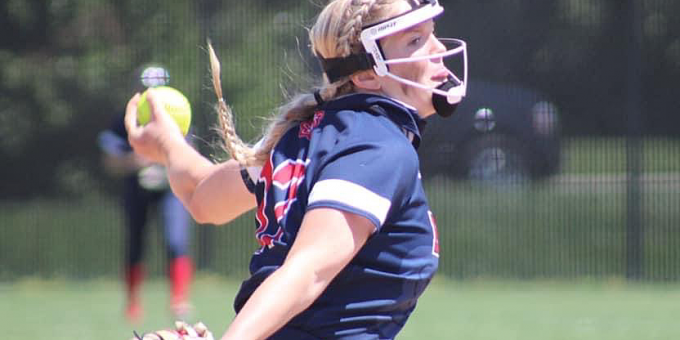 WEST CHESTER, Oh. – Sarah Stone singled in the winning run in the top of the eighth inning as Bedford North Lawrence fought off Oak Hill 7-6 in the second game of a doubleheader at Lakota West on Saturday.

The Stars (17-2 and ranked No.6 in Class 4A) won a wild second game, rallying from behind three times before finally plating the go-ahead run in extra innings.

“It was just a very emotional game. It was just a fight and that’s why we came over here, to face to good teams and test ourselves. Our kids battled back and never gave up on each other.”

BNL was in catch-up mode most of the time against the Highlanders (15-6). Oak Hill took a 1-0 lead in the first on Abby Bode’s RBI single, but BNL answered with a run in the second as Braxton McCauley tripled to left and Haley Deckard singled her in.

Oak Hill went back in front with a run in the third on Maeve Fink’s two-out RBI double, although the Stars saved a crucial run on that play when Lily Hayes was thrown out at home.

The Stars went in front for the first time in the fifth, scoring three times. McCauley laced a two-out, two-run double to right and scored on Deckard’s single. But the Highlanders came right back with three in the bottom of the fifth on two hits and a BNL error.

BNL pulled even in the sixth when Aliza Jewell doubled and scored as Carlee Kern reached on an error. But Oak Hill again went in front later that inning on Kylie Lockwood’s two-out RBI double.

The Stars forced extra innings with a run in the seventh when McCauley singled to right and raced all the way home when the ball was misplayed. That set the stage for the eighth with Kern’s lead-off single, another Oak Hill error, and Stone’s go-ahead hit.

McCauley was 4-for-5 with 2 RBIs and 3 runs scored. Kern, Stone and Deckard all had two hits as BNL totaled 12 hits against Oak Hill’s Avery Gottlieb (who fanned 8). Jewell earned the win in the circle, working three innings and allowing only one run while striking out four.

“Braxton just attacked the ball and hit it well,” Gilbert said. “We had some kids that really hustled hard and put pressure on their defense. We never gave up on any play.”

In the opener, BNL could not generate any offense against the Firebirds. Lakota West ace K.K. Mathis allowed only four hits (all singles) and struck out 11.

“That’s the hardest game I’ve ever coached trying to get some hits,” Gilbert said. “She’s a really tough pitcher. We didn’t do a good job of swinging at what was being called a strike.

“It was a tough day for the visitors to hit. I’m not frustrated with our kids at all. That was a good learning experience for us. You have to swing at what is being called a strike.”

Lakota took control with three runs in the third (with Mathis cracking a two-run single). Tionna Bright hammered a home run in the sixth. Jewell wen the distance for the Stars, giving up 10 hits and six earned runs while striking out 5.

The Stars will visit Barr-Reeve on Tuesday.