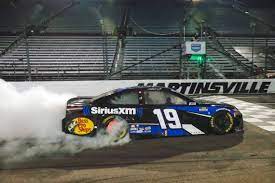 The race began Saturday night but was stopped after 41 laps due to rain. It resumed shortly after 4 p.m. ET on Sunday.

Truex’s No. 19 Joe Gibbs Racing Toyota set the pace for just 20 of the 500 laps in the Blue-Emu Maximum Pain Relief 500. His third win in the last four Martinsville races — and third grandfather clock trophy — marked the 29th triumph of his Cup Series career.

Chase Elliott finished as the runner-up, his No. 9 Hendrick Motorsports Chevrolet winding up 1.972 seconds behind at the checkered flag. A once-dominant Hamlin led a race-high 276 laps but faded to place third. Hendrick teammates William Byron and Kyle Larson rounded out the top five in that order.

Hamlin, who led a race-high 276 laps, appeared poised to battle Ryan Blaney for the win. But on the final pit stops under caution with 47 laps to go, Blaney was penalized after running over his air hose and taking it outside his pit box. He only partially recovered to finish 11th.

Truex Jr. beat Hamlin out of pit road to take the lead, but Hamlin regained it immediately after the restart with 42 laps to go. As the run progressed, though, Truex reeled Hamlin in and eventually made the winning pass.

Sunday’s action included a red flag period of over 20 minutes for a Lap 386 crash that involved a dozen cars.

The wreck was set off by Kyle Busch and Chris Buescher. After Busch made initial contact with Buescher while trying to pass him in Turn 1, the two clashed again off Turn 2 and went spinning – leaving nowhere for drivers behind them to go.

● The Rush Truck Centers Ford Mustang was tight in the center of the corner in the opening laps. Briscoe pitted from 28th for four tires and a chassis adjustment during the first caution period of the night on lap 29. He returned to the track in the 27th position, but then the field was parked on pit road due to inclement weather and the race halted for the night.

● When the race resumed on Sunday afternoon, Briscoe reported his Ford Mustang fired off free. He slipped back to the 29th position and lost a lap to the leaders on lap 97.

● Briscoe advanced to the 26th position before the conclusion of the first stage. At the break, the Rush Truck Centers team pitted for tires, fuel and adjustments to help Briscoe turn better in the center of the corner.

● The Rush Truck Centers driver started the second stage in 25th and was running 26th, two laps down to the leaders, when the caution flag was shown on lap 242.

● The yellow flag allowed Briscoe to stay on track as the leaders pitted to get one lap back. He reported the No. 14 Ford Mustang fired off better but was lacking forward drive.

● Briscoe restarted 26th, one lap down, but a subsequent caution on lap 252 slowed the field once more. Crew chief Johnny Klausmeier brought the No. 14 to pit road for tires, fuel and adjustments to help the Rush Truck Centers Ford’s forward drive.

● The race returned to green for the final two laps in Stage 2 with Briscoe restarting 26th. His racecar sustained damage to the right-front fender on the restart but moved into 25th before the conclusion of the stage.

● At the break, the No. 14 team pitted to make repairs to the damaged fender and gave Briscoe four fresh tires.

● Briscoe continued to battle no forward drive in the opening laps of the final stage. He was running 26th when the 10th caution of the race occurred on lap 331 and he was awarded the free pass to return to the lead lap.

● A series of cautions followed, allowing the Rush Truck Centers team to pit for tires and adjustments. The changes made during a pit stop on lap 341 improved the handling of the No. 14 Ford Mustang on the short runs.

● The 26-year-old rookie driver used the short green-flag runs to work his way up to the eighth position on lap 382 before his Ford Mustang started to get too loose in the center of the corners, causing the No. 14 to slip to 12th before the red flag was displayed on lap 387 for a multicar wreck in turn two.

● Briscoe restarted 10th when the race returned to green on lap 396 and raced up to eighth before being routed out of the bottom groove. The No. 14 was taken three-wide and quickly dropped back to the 20th position as Briscoe reported that it felt as though he had a tire going flat.

●  The Rush Truck Centers driver was able to stay on track though his lap times slowed. However, on lap 453 Briscoe made contact with the outside wall, bringing out the caution. The team told him there were problems in the right rear, as well as the front end, but he returned to the track five laps down to the leaders in  22nd.

●  Briscoe continued on but had to make an unscheduled pit stop under green with two laps to go for a flat tire, relegating the No. 14 team to a 27th-place finish.

“I’m not really sure what went wrong there with 100 laps to go. Something just felt off after we got pushed up off the bottom and started falling back. The team did a really good job of sticking with it and coming back from two laps down. Johnny (Klausmeier, crew chief) called for some really good adjustments, and we had a great short-run car. It just started to get a little free, and we never got a chance to work on it.”

●  The Blue-Emu Maximum Pain Relief 500 began on Saturday night and 42 laps were completed before rain washed over the .526-mile oval, forcing NASCAR to postpone the remainder of the race to Sunday.

●  Harvick earned his sixth top-10 of the season and his 20th top-10 in 40 career NASCAR Cup Series starts at Martinsville.

●  Martin Truex Jr., won the Blue-Emu Maximum Pain Relief 500 to score his 29th career NASCAR Cup Series victory, his second of the season and his third at Martinsville. His margin over second-place Chase Elliott was 1.972 seconds.

●  Denny Hamlin remains the championship leader after Martinsville with a 76-point advantage over second-place Truex.

The next event on the NASCAR Cup Series schedule is the Richmond 400 on Sunday, April 18 at Richmond (Va.) Raceway. The race begins at 3 p.m. EDT with live coverage provided by FOX and SiriusXM NASCAR Radio.