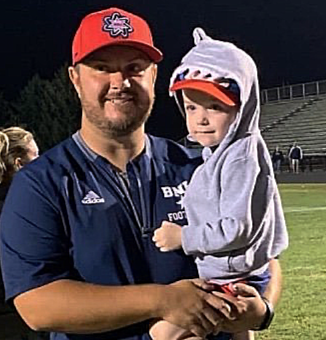 BEDFORD – Derrick Barker, the defensive coordinator for Bedford North Lawrence the past two seasons, has been named the new head football coach for the Stars.

Barker succeeds Steve Weber, who stepped down after eight seasons with the program. It completes a meteoric rise, from a volunteer with no coaching experience to the head coach, in only seven years for Barker, who played under Weber at Linton.

Barker, an offensive lineman with the Miners, graduated from Linton in 2009 and played one season at Rose-Hulman. He joined the BNL staff as a volunteer assistant and worked up as offensive line coach, special teams coach and defensive coordinator. He follows in the footsteps of Gil Fey, Terry Willoughby, Marc Anderson, Dave Conrad, Randy Johnson, Jeff Callahan, Bret Szabo and Weber in program history.

“Being a head coach was a goal from the day I got into coaching,” Barker said. “I knew it was something I wanted to work toward, especially the personal side of being a leader and a good role model.

BNL went 2-7 last season and missed the state tournament when members of the coaching staff tested positive for COVID-19. Weber went 33-48 in his eight seasons. His departure opened the door for his former player and friend.

“Coach Weber and I had a great relationship,” Barker said. “I love him as a coach, a person and a friend. I’m not going to compare myself to him or do everything different from what he did. I have a lot of respect for him as a coach. I’ll take some the great lessons he taught me and be the best coach I can be.”

Barker plans to keep many aspects intact, including most members of the coaching staff and the triple-option offense BNL has used the last seven seasons.

“We don’t want to completely dump it,” Barker said. “Our kids know it well, and it does fit us and our personnel. There will be things we add to it. We won’t reinvent the wheel, but there will be some new things. You’ll see some new things offensively, some new formations and players in new positions to utilize our strength to our advantage.”

While the on-field focus is important, Barker intends to emphasis the off-field intangibles.

“The first thing I want us to be known as is competitors,” Barker said. “And a team, at all levels, of great people. You’ll hear me say a lot ‘Better people make better Stars.’ That’s my motto and belief.

“We’re going to compete to be the best students we can be. That’s our first priority. I want our team to be out helping the community, whatever that might be, getting involved. We want to show we love the community and for the community to love us. Then we’ll get into winning.

“We need a good leader who can come in and hit the ground running, try to take what we’ve been building and take it to another level.”

Changing the mindset and the accepted behavior will be high on the quick to-do list.

“We want to be exciting, to score a lot of points, play great defense. But it will come down to the little things, our tackling, our effort. We’ll prepare to win ever game. One of the things I believe in is there’s a way to win every game. That’s an old Bill Parcells quote, and I fully believe it. We’re going to work our tails off every day.”

While waiting for the completion of the new turf facility, scheduled to be done this summer, Barker will get started with the strength program, then being spring practice sessions in April. He also plans on a team summer camp and 7-on-7 competitions before the Stars report for the start of the 2021 campaign in August.