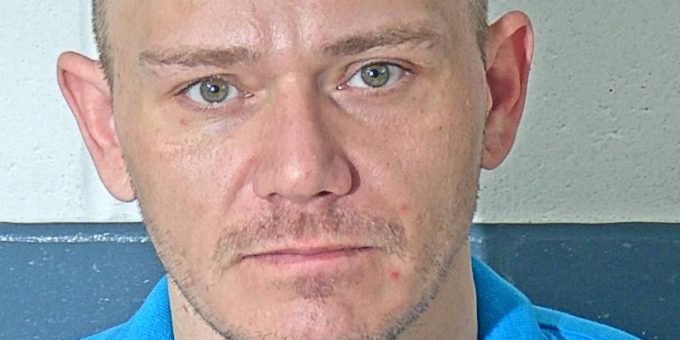 BEDFORD – A Bloomington man was arrested on a warrant Tuesday, after Lawrence County Sheriff’s Department deputies say he stole a vehicle on February 13th.

On that day a deputy was patrolling on State Road 58 East near the intersection of North Shawswick Station Road when he noticed a blue BMW ran off the right side of the road into a small field after striking a ditch and a small wire fence. The driver door was open and the vehicle was still running.

The officer was unable to locate the driver and the vehicle was towed.

While taking photographs of the  vehicle the officer found a brown leather wallet in the driver’s seat that belonged to 38-year-old Kevin Carter, of Bloomington, who was the owner of the vehicle. He also found a syringe in the center console filled with heroin and fentanyl.

Police received a second report of a suspicious male that attempted to break into a home in the 1600 block of State Road 58 and could be seen walking in the backyard near the tree line.

When police responded to that location they found fresh footprints in the snow and followed them to a shed with a light on inside.

Officers announced themselves, but the man would not exit the building.

Officers entered and found Carter hiding underneath a shelf behind a wheel barrel.

Officers had to physically pull Carter out from under the shelf.

Carter told the officer he wanted the officer to touch his forehead “so his fate can be released” and continued to repeat that statement.

Carter then stated he had “done something bad and that he had opened a time portal”.

An ambulance was requested to the scene and Carter was transported to IU Health Hospital for treatment.

The information was forwarded to the Lawrence County Prosecutor’s Office and a warrant was issued for Carter’s arrest on charges of possession of a narcotic drug, unlawful possession of a syringe, residential entry, auto theft, criminal mischief, unlawful entry to a motor vehicle.