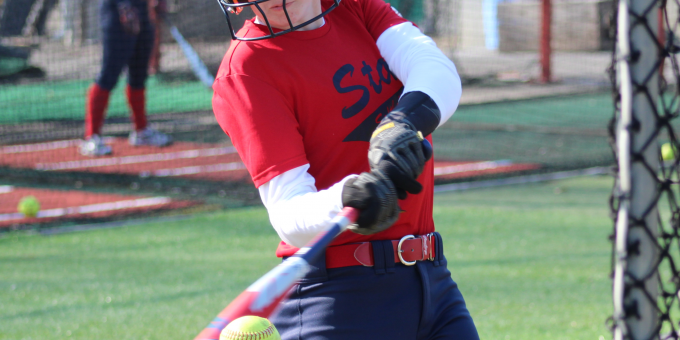 BEDFORD – The sweetest sound of spring, better than a robin’s chirp, definitely better than a lawn mower’s growl, is the solid smack, the connection of bat and ball. After a year’s absence, the symphony of softball has returned to Bedford North Lawrence.

Following the cancellation of the entire 2020 campaign, as COVID-19 crash landed on all spring sports in Indiana and wiped out everything, the Stars are back, christening a new-look facility during the opening day of practice for the 2021. And there’s no grass to mow.

BNL officially took the field on the sparkling turf diamond, with its perfect bounces and pristine colors. Nothing could be finer than to be in uniform, chasing that yellow ball, under a warm sun. It was perfection.

Nothing can replace what was lost. BNL had two seniors – Macy Horton and Molly Lambrecht – who had their final season erased. They had a promising, talented team miss a chance at glory and greatness. That might seem small in comparison to the loss of lives, jobs and freedoms, but for the teen-agers who love the game, it left a hole in their best years. They now get the chance to make up for lost time.

“You only get four years, so missing one hurt,” BNL’s Brynlea Bennett said. “It was very upsetting. We’re all ready, eager to play. It brought a sense of how much it really meant. It made me realize how much I love it.”

“I strongly dislike the fact we were robbed of a year,” BNL senior Sarah Stone said. “High school ball is a chance to reconnect with how much you love the game. I love playing it. We could have gotten a lot accomplished. For it to be taken from us . . .

And then she summed it up for everyone, everywhere. “COVID just sucks.”

The virus is still a threat, even as numbers plummet and the color code relaxes to a softer hue. But after successful sports seasons in the fall and winter, the girls of spring are ready to blossom. And when BNL hits full bloom, the Stars expect something spectacular.

With Stone, a hard hitting University of Kentucky recruit, anchoring the offense, with veterans mixing with a loaded sophomore class that’s ready to come of age, BNL is poised for an explosion of emotions and success.

I think we have the potential to be very strong,” BNL coach Brad Gilbert said. “We have kids that play a lot, they love the game, they’ve worked hard. If we can take those individuals and get them to bond, buy into the things we’re saying and believe in, we have a chance for some really good things.

“Time will tell. On paper, we look pretty good.”

BNL won’t play on paper, but on the rubberized pellets of a new field. That was helped raise the excitement level as well.

“I’ve been waiting for the turf,” Stone said. “I absolutely love it. It’s gorgeous.” “Its beautiful, it’s awesome,” Bennett echoed. “We had a great facility before, but the look of it now is even more exciting.”

Then add the kids with hard-throwing pitcher Annie Waggoner, left-handed speedster Braxton McCauley, versatile Lauryn Anderson and hurler Haley Davis among those whose reputations have preceded them. Their summer travel exploits have prepared them for their first, if not delayed, varsity campaign.

If a Game 1 lineup were to be scribbled down in pencil, it might look like Kern at shortstop, Stone at catcher, Waggoner in the circle, Bennett at third, Anderson at 2nd base, Blackwell at first, and an outfield including Deckard and McCauley. But that’s not written in ink. The next two weeks of preseason work might change the script.

“We’re as deep as we’ve ever been,” Gilbert said. “You could pick from a handful of kids to play different spots. It will be very competitive the next two weeks to see who shines and gets the opening-day starts.”

BNL’s goals are lofty. Last year the Stars had planned on shooting for the Hoosier Hills Conference championship (BNL has not won one since 1998). What about a sectional crown? The Stars have won 11 of those, the last in 2018, plus one regional in 1997. Gilbert had additional goals last season for records in stolen bases (71), wins (23) and runs (301). That hasn’t changed.

What has changed is perspective. BNL has always had passion for the game. Now it’s been redefined, with the virus backdrop.

“It makes you reevaluate everything in your life,” Gilbert said. “You realize we really did miss the game. You could just tell the kids were anxious to hang out with each other. It was tough.

“It was terrible for everyone. For some people, it was a lot worse. A lot of people lost more than just playing some softball games. So you have to put that in perspective. It is just a game and there are things a lot more important.

“With experience and things like that, it hurt. A lot of our kids play travel ball, but not all of them. You lose a year of playing with teammates, and bonding, all the fun times. That’s as big as anything.”

BNL will start the recovery of those lost memories in the season opener on March 27, when the Stars return from Spring Break week to host Martinsville and Loogootee in a round-robin doubleheader.