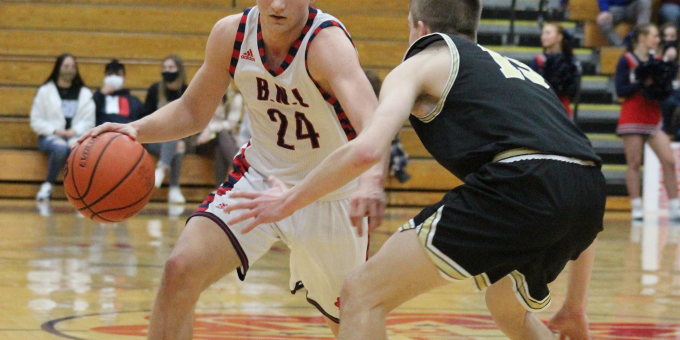 BEDFORD – Bedford North Lawrence will end the regular season with a sectional-worthy opponent, a final test of its postseason readiness as the three-game tournament gauntlet loom ahead.

The Stars, building momentum with a current two-game winning streak, will renew a series with Evansville North on Friday night, and the Huskies (13-7) have similar properties and threats of the possible obstacles looming ahead in Sectional 15.

Successful teams usually have a star, multiple weapons, and defensive toughness. North checks all the boxes.

Chandler Moore, a 6-4 senior forward, is the star. He averages 18.6 points, 6.2 rebounds and 3.5 assists per game. Ryan Caddell (15.5 points) and Cameron Gelhausen (10.2) are additional firepower. The Huskies have held four opponents to 40 or fewer points.

Start with Moore, recently named the Player of the Week for Southern Indiana by the Indiana Basketball Coaches Association. He’s a dangerous scorer who’s averaged 26.7 over North’s last three outings.

“He’s one of the best we’ll see all year,” BNL coach Jeff Hein said. “He reminds me of (Floyd Central’s Jake) Heidbreder in a lot of ways, probably more athletic. He has the ability to score.”

“Moore is playing at a really high level right now,” North coach Jason Roach said. “He can score in multiple ways. He’s a driver and a shooter. We ask him to do a lot for us.”

The secondary attack comes from Caddell, a deadly shooter from distance with 51 treys this season, from Gelhausen (a 6-5 junior who adds 4.4 rebounds) and from senior Dom Redding (8.8 with strong post play).

The defense works best with its constant switching and ball pressure.

“They remind me so much of Floyd Central, the way they play,” Hein said. “They switch everything, they have size and length. It’s good preparation for the sectional.”

BNL and North last collided in 2007. For the Huskies, who can find excellent competition without venturing far from home, this long trip is being made to cement its status as the pre-sectional favorite in Sectional 16.

“It’s a great program, a historic program,” Roach said. “It’s an opportunity to play a team that’s well coached. Jeff always has his kids prepared and ready. It’s a chance to get out of our comfort zone against a team that plays a different style. It’s a good challenge for us. We’re trying to find our groove heading into the tournament.

“Kooper Staley shoots it well from deep and (Colten) Leach is the engine for them. He can get to the rim and has a nice spin move. (Ben) Cosner is pretty athletic and physical. They might slow it down on us a little bit. It well be a hard-fought battle. They’ll give us all we can handle.”

Game notes: BNL leads the series 6-2 and has won two straight meetings, The series started in 2001.