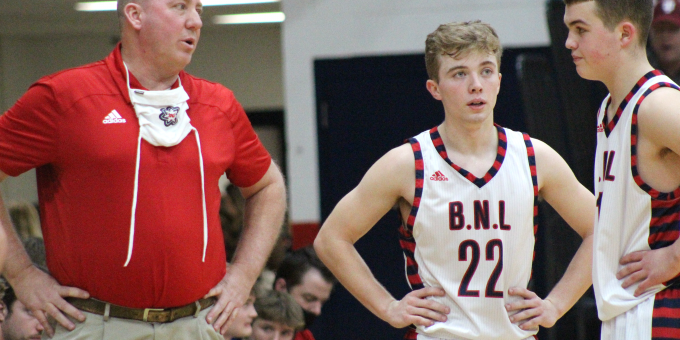 BEDFORD – As Bedford North Lawrence nears the conclusion of the regular season and looks ahead to the one-and-done drama of the postseason, the spotlight turns to the constant of championship programs.

Defense. The old cliche is absolutely correct. Want to win trophies? Win on that end.

The Stars (10-10) have been sporadic offensively, especially when controlling the pace and tempo of the attack. It’s been dogged defense that has allowed BNL to be competitive against opponents with more talent and firepower.

They have gotten the most out of their abilities because they’ve been able to give up the least, surrendering only 51.7 points per game. They’ve held six teams to 45 or fewer points, and they’re 5-1 in those games. As BNL prepares to face Jasper (6-15) on Thursday, the talking points are easily identified.

“We can win some games coming in if we play defense,” BNL coach Jeff Hein said. “If we don’t play defense, we’re not going to beat anybody. It all comes down to how well we defend.”

Jasper, on paper, might not possess the offensive muscle of other notable BNL foes. The Wildcats total only 49.8 points per game, and only one player – junior guard Isaac Day at 10.8 – averages in double figures. But BNL cannot overlook these cats.

The Wildcats have waded through a deep, formidable schedule that includes losses to New Albany (55-47), Jeffersonville (53-28) and Class A power Barr-Reeve (56-54). They’ve lost twice in overtime.

“We’re a young team that has lost several key games down the stretch due to mistakes and missed opportunities,” Jasper coach John Goebel said. “We have also lost to some very talented teams. We’re looking for more consistent intensity and execution, especially with the game on the line, to try and build some momentum leading into the sectional.”

In addition to Day, Jasper features junior Tanner Erny (8.2) and senior Caleb Burger (5.7). The other starting spots are still in play as the Wildcats, who conquered Vincennes Lincoln 54-35 on Tuesday, seek consistency to go with the balance.

BNL will counter with its trio of main weapons in sophomore Colten Leach (13.3 after netting 20 on Tuesday at North Knox), senior Ben Cosner (now at 11.0 after back-to-back games of 20-plus) and Kooper Staley (10.3). The Stars still need another threat to mature.

The Stars have won three of their last four games.

“Every game is going to be different,” Hein said. “What happens on Thursday will be completely different than what happened Tuesday (at North Knox). Every night has different situations and scenarios.”

The constant? Defend, or enjoy the view from the sideline.

Last meeting: On Dec 10, 2016, the Wildcats prevailed 57-54. Tyler Nottingham had 17 points for Jasper, while McCall Ray had 19 points and freshman Brayton Bailey had 17 for the Stars. Jasper hit 12 3-pointers.