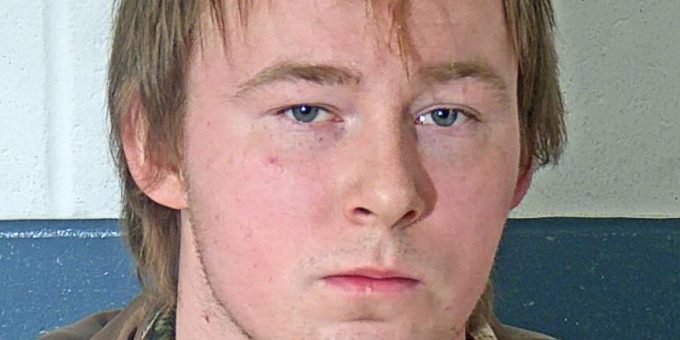 (MITCHELL) – A Mitchell man was arrested Monday after police say he lost control and slapped a woman in the face.

Mitchell Police officers arrested 21-year-old Quinton Scholl on a charge of domestic battery in the presence of a minor.

According to a probable cause affidavit, officers arrived at the home at 10:48 p.m. to the sound of yelling inside the home with the back door partially opened.

“A male and female were arguing,” the officer wrote. “I knocked on  the backdoor and stated “police”. I waited for several  seconds and no one came to the door. I overheard a male  say “I’ll punch you again” and upon hearing that I made  entry inside the residence.”

When police entered the home they found Scholl in the living room and a woman holding two small children in her arms. The woman appeared to be upset and scared. The woman’s left side of her face was visibly swollen and red. She also was bleeding from a cut on her foot.

Next to a crib, the officers found broken glass on the floor.

The woman told police Scholl had smacked her in the face.

The woman also told police Scholl has a history of being unfaithful so she questioned him about who he was texting on his phone. This questioning upset Scholl and led to an argument. The argument escalated to the point where Scholl smacked the woman in the face. She then messaged her sister about the incident, who contacted the police.

When Scholl learned the police were contacted and were responding to the home, Scholl stated he might as well beat her up. The woman fled to the bedroom but Scholl was still allegedly punched her in the back while she was holding their 2-year-old son.

The woman told police Scholl broke their television and several picture frames and also dumped out a bag of trash on the kitchen floor.

The woman requested not to file charges. However, police arrested Scholl based from the history of the domestic calls they have responded to in the past.

Scholl told officers the two got into an argument and he “lost control”. He admitted to smacking the woman in the face. He denied punching her in the back or breaking the television, but did admit to breaking several picture frames.