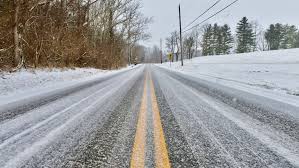 (LAWRENCE CO.) – Taking care of roadways in nice weather is a difficult task. However, the challenge of clearing the snow from more than 700 miles of roads is even more challenging during a winter snowstorm.

Compliments and complaints all come with the territory in trying to make decisions for Lawrence County. One of those many decisions includes travel advisories, which the Lawrence County Commissioners made Monday night.

“The red travel warning that went into effect last night allowed the crews to get out on the roadways without motorists and was beneficial to road crews,” said David Holmes Supertindent Lawrence County Highway.

“We want to thank your crews for all the hard work they have done, and we appreciate what they do,” stated Lawrence County Commissioner President Rodney Fish.

“We want to thank all the highway crews from Bedford, Mitchell and Oolitic Street Departments, as well as, the Indiana Department of Transportation crews for what they have done during this last winter storm,” said Holmes.

The Lawrence County Highway Department has 13 snowplows and 3 small utility trucks, all of which were on the roads working to clear large amounts of snow today.

It normally takes about 10 hours to get through the county highways both ways.

The crews have worked 10 hours shifts and will continue to do so until roadways are clear.