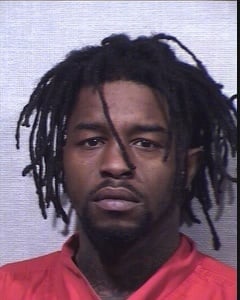 (SEYMOUR) – A truck driver was arrested Sunday on numerous charges after an accident on I-65 near Seymour.

At approximately 10:30 a.m. an Indiana State Police trooper responded to a report of a semi-tractor-trailer parked on the shoulder of northbound I-65 near the 53-mile marker, just north of Seymour.

When the trooper arrived, the driver 29-year-old Kendarius Poole, of Riverdale, Georgia told the trooper he had flat tires that needed to be repaired.

The trooper noticed fresh damage to the semi indicating Poole had been involved in an accident.

An ISP K-9 then alerted troopers to possible drugs in the semi.

During a search of the truck, troopers found marijuana and synthetic urine.

A search warrant was obtained for a blood draw.

Poole was arrested and transported to the Jackson County Jail on charges of operating a vehicle while intoxicated, OWI endangerment, leaving the scene of an accident, possession of marijuana, and possession of synthetic urine.