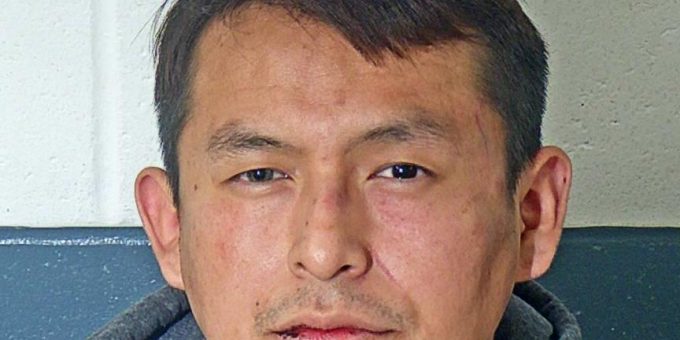 (BEDFORD) – An Arizona man was arrested early this morning after Lawrence County Sheriff’s Department central dispatch received a 911 call reporting a physical altercation between a woman and her boyfriend.

Officers responded to a home in the 110 block of 5th Street in Oolitic. The dispatcher reported that both the male and female were locked in a bathroom.

When they arrived they found 31-year-old Seanee Johnson standing in the living room.

The male returned to the home and was upset that Johnson was still at the house with his sister.

Johnson then refused to tell police what happened.

Although Johnson had blood on his foot and mouth, he could not recall what happened when he was questioned by the police.

The other male reported he arrived back home and was resting in a living room chair when Johnson began striking him in the leg. The other male ignored the strike and went to bed. He then was awakened to fine Johnson sitting on his bed, staring at him.

At that time, Johnson jumped on top of him and pinned him to the bed. Johnson then bit the man on the cheek and on the right side of his neck and then proceeded to choke him.

The man attempted to get away from Johnson leading to a tussle to the floor, where Johnson punched the man in the face.

The man admitted that he hit Johnson a few times to defend himself. He managed to flee, locked himself inside the bathroom and called 911.

The man had visible injuries to his face, neck, chest and arms.

Johnson was arrested on charges of battery and strangulation.