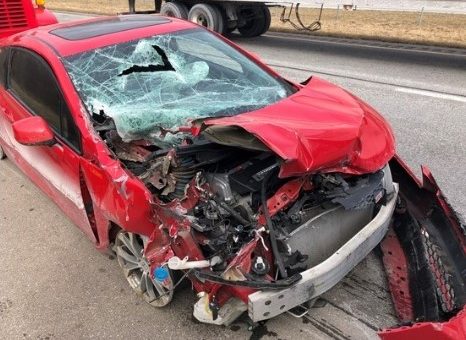 (JACKSON CO.) – A 30-mile long police chase that started in Jackson County Monday ended with a car crashing into the rear of a semi and a Crawfordsville man behind bars.

According to an Indiana State Police report, a trooper stopped a vehicle on I-65 in northern Jackson County. While the trooper was speaking with the driver, he sped off.

More troopers joined the chase and despite having two tires flattened with a tire-deflation device just south of Seymour, the driver continued on into Scott County, where more tire-deflation devices were used. The vehicle then crashed into the rear of a semi-trailer near the Scottsburg exit.

After struggling with police and medics, the driver 30-year-old Mitchell Jones was taken to Schneck Medical Center to be medically cleared.

He was then arrested on charges of battery by bodily waste, battery against a public safety official, resisting law enforcement, and operating a vehicle while intoxicated.