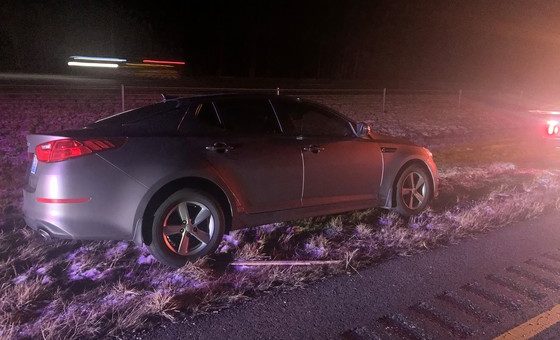 The four men, who were traveling in a 2015 Kia, were pulled over by a trooper after traveling in excess of 100 miles per hour.

Police obtained information that criminal activity was taking place in the car and called for additional ISP troopers. During the investigation, Derek Fajardo, the driver of the car, attempted to drive the car from the scene.

In the attempt, the car made contact with a responding ISP trooper, who was treated for minor injuries.

ISP then pursued the car northbound on I-65 where it exited onto State Road 46 into Columbus. Police say Fajardo did a u-turn and entered back onto I-65 southbound.

The car soon entered into Jackson County where police deployed a tire deflation device. The car ran over the device.

Gunshots were fired during the pursuit and three guns were thrown from the car. They were located along I-65 in Jackson County.

The car came to a stop on I-65, just south of Seymour. All four occupants of the vehicle were arrested are facing multiple charges.

Police say one of the guns thrown from the vehicle and the Kia the men were in were reported stolen from Louisville.

Fajardo is facing charges of possession of a stolen vehicle, resisting law enforcement, battery, and reckless driving. Griffith was also wanted on a warrant out of Louisville.

All four men are currently being housed in the Bartholomew County Jail.