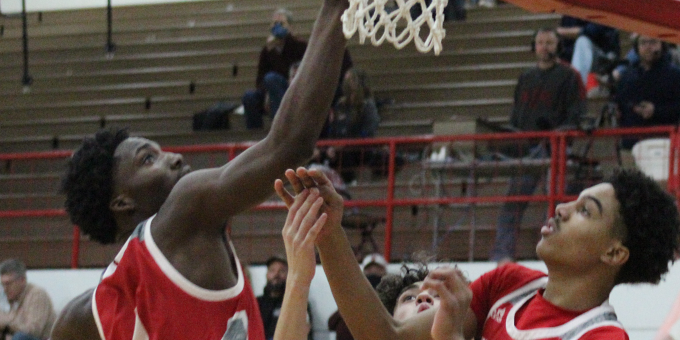 BEDFORD – Digging holes, like a dog with a bone, like a mole with a mission, like an oil driller seeking black gold, can uncover a prize or create a mess. For Bedford North Lawrence, the trend has been falling into a deficit crater, scrambling to the rim, and plunging back down.

So close, so frustrating. This time, Jeffersonville’s Will Lovings-Watts shoveled the dirt on the Stars and buried them.

Lovings-Watts, a 6-5 junior with fast feet and interior panache, scored 22 points as the Red Devils conquered the Stars 54-49 on Friday night. Kobe Stoudemire had 15 points, all from long range, and the Devils repelled BNL’s second-half spurts and threats for the lead. BNL never got there.

Jeffersonville (6-5, 2-2 in the Hoosier Hills Conference) took control with a 15-3 run to end the first half, and the Stars – despite getting grubby faces during their mining from underneath – could not find the surface. They trailed by as many as 9, got within single possessions twice in the fourth quarter, but ended up eating dirt and swallowing another tough defeat.

Contact tracing BNL’s problem was easy. The Stars (6-8, 3-2) lost contact in latter stages of the first half. They owned a 21-16 advantage, then went the final six minutes without a field goal.

“That killed us,” BNL coach Jeff Hein said. “We got passive. Why? I don’t know. We had a good first quarter and got going, we just didn’t attack the pressure. We didn’t get shots. You can’t score unless you get shots. That was the quarter that beat us.”

BNL started clean, with Kooper Staley busting two 3-pointers and Colton Staggs bombing another to end the first quarter with a 16-14 lead. When Staley started the second with a 15-footer and Ben Cosner swished another long jumper, the Stars were in front by five and cruising. Then the roof caved in.

Lovings-Watts went to work with a 3-point play and a wing drive through the middle of BNL’s zone. Stoudemire and Brandon Rayzer-Moore dropped bombs over it, the last one to end the half with a 31-24 edge. BNL had four turnovers and only 3 shots in the second quarter.

“We changed up our defense,” Jeffersonville coach Andrew Grantz said. “We wanted to pressure them a little bit. Those few plays were the difference.”

BNL stayed within constant striking range in the second half, battling within 35-32 late in the third with a Staggs trey and Cosner layup, getting back to 38-36 early in the fourth with a Jackson Miracle layup against the press, and within 51-48 inside two minutes on Cosner’s tip.

Every time, the Devils had an answer. It was usually Lovings-Watts, who had 8 fourth-quarter points, including a slam for a 51-44 lead with 2:17 left. Stoudemire was also a key while going 5-of-6 from the bonus line. Jaylen Fairman, a recent addition to the Jeff roster, added 10 points.

“Will did a very good job of getting to his spots, and athletically he does a good job,” Grantz said. “He’s able to finish because he can get up above the rim.”

“The zone looked good, for as little as we’ve played it,” Hein said. “We haven’t played a lot of it. Stoudemire is a tough kid. Lovings-Watts is so good getting to the basket, so shifty and strong. He’s hard to keep in front of you.”

Cosner paced the Stars with 14 points while Leach totaled 13. BNL did a lot of things right (shooting 50 percent, winning the rebounding battle). But the second-quarter lapse was the pivotal point. BNL ‘won’ three of the four quarters, but that’s not the way it works.

“Honestly, we’re not good enough to dig holes and win games. We have to be able to play well for four quarters to compete with upper-echelon 4A teams. We haven’t been able to do that. Unfortunately, we’re not doing it consistently enough. Therefore, we’re 6-8.

“Am I happy being 6-8? No. I think we’ve got a couple out there we’ve let get away. On the flip side, maybe we’ll learn and peak at the right time, win some games at the end we’re not supposed to win.”

BNL, with back-to-back losses, with look to bounce back against Horizon Christian, hoping to apply lessons learned from those setbacks. In reality, beating the small private school might not be a true test. Bigger hurdles lie ahead, against potential sectional opponents like the Devils.

“Let’s get it done on the floor and quit talking about learning lessons, find a way to tough one out and beat someone we’re not supposed to beat,” Hein said. “We haven’t had a big win. At some point, we need to get a big win.

“And tonight was the night. I thought they were ripe, I thought we were ready. If we could have played in the second quarter the way we’re capable, we could have done the same thing we did to them last year. Too many could-haves and not enough Ws.”

Action with Horizon Christian (with its game against Lakeview Christian postponed on Friday) on Saturday has been moved up to a 1 p.m. junior varsity start because of predicted bad weather in the Indianapolis area.