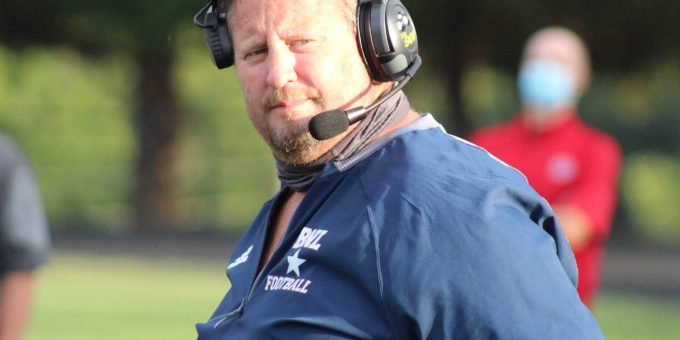 Weber posted a 33-48 record during his tenure with the Stars. His best season came in 2018, when BNL went 8-3. The Stars were 2-7 in 2020, finishing with five straight losses, and missed the state tournament when team members tested positive for COVID-19 the week before the sectional.

BNL had two winning seasons (6-4 in 2017) and won two sectional games (2015 and 2018) under his guidance. He introduced the triple-option offense, which gave BNL an explosive attack.

“The last couple of years have been brutal, there’s no way around it, with low numbers and young kids, all the COVID stuff,” Weber said. “But positive things came out of it and I hope it stays with them. We started to learn how to work out again, how to train hard as a group.

“They started getting that back and we were making some progress. In my book, that’s the No.1 thing you have to do as football players, you have to train hard. They started to like that again.

“A lot of hard work, camps and things like that, went into the option, and it definitely helped us. When you look at Bedford football, we’re not always blessed with the biggest linemen. Our only hope was to instill that, the shotgun was our best chance to win. The kids caught on pretty quick and were very successful.”

In addition to the wins, Weber pointed to the friendships and connections he made with former players as his best memory.

“To me, when I’m out here on the field coaching, and a handful of kids come back to watch practice, come down on the field and talk, that’s neat to me,” he said. “When you make those connections and those friendships, that means everything.”

Prior to his work with BNL, Weber coached at Linton, winning 6 sectionals and 4 regionals (with six undefeated regular seasons) during his 13 years with the Miners. His overall record is an impressive 161-77.

“I’m not done coaching,” Weber said. “I will land somewhere. It’s in my blood, it’s what I love. Wherever it is, I will put my heart and soul into it.

“There’s a lot of hours, people don’t understand. I want to thank my staff. There were so many camps, at no charge, for young kids and junior high, all the clinics. There’s been a lot of work going into this place. It’s a tough place to coach, but success is possible.”

In addition to the coaching change, BNL will also introduce its upgraded facilities next season as work on the synthetic turf field is scheduled to be completed during the summer.

“I would like to thank Coach Weber for the time, effort and energy that he invested in the BNL Stars football program over the last 8 years,” BNL athletic director Jeff Callahan said. “I enjoyed working with Steve during his tenure here. Steve is dedicated to the coaching profession.

“He left his mark on the Stars football program. I wish Steve and Jill (his wife) nothing but the best at their next stop on the coaching trail.”

BNL has started the search for a new coach.