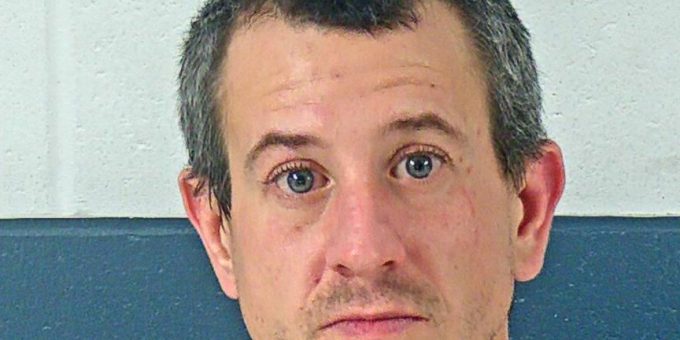 (BEDFORD) – A Bedford man was arrested on domestic battery and drug charges Monday night after Bedford Police officers were called to the 630 block of Riley Boulevard Monday night.

According to a probable cause affidavit, officers received a call about a possible domestic fight that abruptly ended.  The dispatcher was able to ping the call to the 600 block of Riley Boulevard. Police were familiar with the address having responded to the home in the past.

When police arrived they were able to see the interior of the home through a window. They witnessed a large hole in the wall with the living room contents in disarray.

An on the scene officer attempted to gain response from the home by knocking on the door and announcing their presence. Eventually the door of the residence became ajar, a result of repeated knocking.

Officers found 33-year-old Jordan Fleetwood upstairs with bleeding knuckles from cuts. Fleetwood claimed the cuts were a result of self defense.

Officers then located a woman locked in a bedroom with a 2-year-old.

The woman stated that Fleetwood had “put his hands on us for the second time tonight.” The woman also told police Fleetwood shoved and pushed her demonstrating red marks and scrapes on her arms and back.

The woman did not want to file charges in fear that Fleetwood would lose his job.

Police conducted breathalyzer tests on both residents. The woman blew a 0.157 and Fleetwood tested at 0.112 percent.

Officers did locate a metal grinder that contained a small amount of marijuana in the kitchen of the residence.

Fleetwood was arrested on three separate charges. Those charges included domestic battery in the presence of a minor, possession of marijuana, and possession of drug paraphernalia