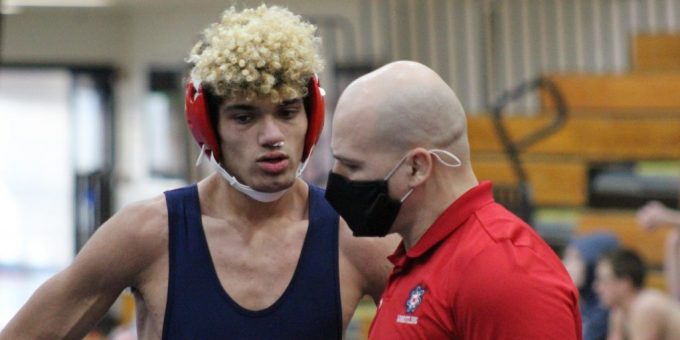 The Stars pounded undermanned Paoli 45-6, then dropped a 63-12 decision to the Patriots. BNL celebrated the careers of seniors Jaythan Hudson, Byron Kyger and James Covey.

“Jaythan, Byron, and James have all contributed to a great first season for me at BNL,” BNL coach Chris Branam said. “Jaythan has shown a ton of passion for the sport as a first-year wrestler. When he was quarantined earlier in the season, he was constantly checking in regarding the team. He couldn’t wait to be back on the mat.

“Byron always comes in with a good attitude in the mat room and he always pushes himself in training. James is so consistent in his effort and his attitude on the mat. He is truly a leader by example. The three of them represent the passion, the positive attitude, and the consistent effort that I want our younger wrestlers to emulate.”

On the mat, BNL won the contest with the Rams with seven forfeits. Hudson claimed one of only two contested matches with a 17-15 overtime decision over Adin Monroe at 132 pounds.

The Stars won only two matches against the Patriots. Reese Hamblen pinned Conner Rogers in 3:46 at 145, and Covey clamped down Bryce Mills in 1:54 at 220.

“Jaythan got a big win,” Branam said. “Overtime matches are all about who wants it more, and Jaythan was able to seal the deal in the sudden-death period.

“We then faced a really tough Owen Valley lineup. Reese Hamblen looked like he had returned to form after taking some tough losses at conference. Byron wrestled heavier tonight and ran into some really strong competition. James Covey looked dominant in his win.

“I think we were a little flat tonight honestly and we’ll spend next week getting ready to come out with more energy and aggression against Columbus North.”

BNL will visit Columbus North on Jan. 21, the final regular-season match before the sectional on Jan. 30.