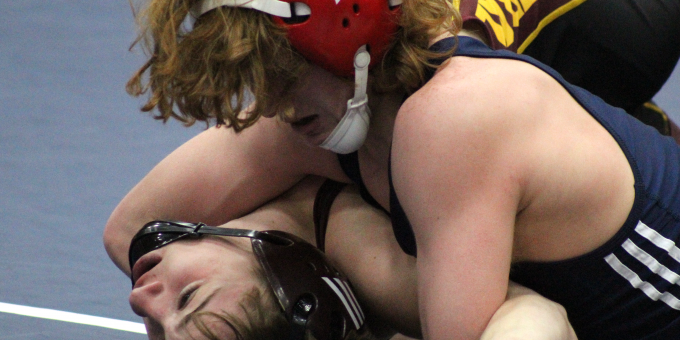 Wrestling moves and holds all have names, some of them wicked, some of them self-explanatory. Hamblen might have created a new one during his pin victory. He had no idea what it was called, that sneaky sidestep twist to catch his opponent vulnerable, but he pulled it off perfectly.

Hamblen’s pin at 145 pounds finished a successful night for the Stars, who recorded a 39-15 triumph over Pike Central on Thursday night. Mitchell was the original adversary on the schedule, but the Chargers filled in on short notice when the Bluejackets pulled out.

BNL took advantage of the work with five wins on the mat, three of them pins as the clock ticked away to end a period, with a team triumph over possible sectional opponents. The Stars, with dwindling numbers on the roster because of injuries, were tough and tenacious.

“It gets to the end of the year, and it’s a rough season,” BNL coach Chris Branam said. “Any time you’re going out, you’re getting your joints pried on, your face smashed into the mat. So the guys who last this long, and are still hungry, are the guys we want out there. They’ve shown they’re in it to win it. These are the survivors.”

The Stars not only survived, they thrived in late-clock situations. Brax Huber flattened Pike’s Ryan Gladish with 4 seconds left in the second period of their battle at 126 pounds, and Hamblen pulled off his slide-and-ride move to flatten Jon Cannon with 5 seconds remaining in the first period.

“We really coach going whistle to whistle,” Branam said. “Don’t stop until the ref stops you. If that means keep trying until you go out of bounds, or keep trying even if there’s 10 seconds left, you still try to win the match. It’s just a mindset. We’ve seen that growth. That was a tough match for Brax. For him to not let up, wait until he found his moment, that’s good wrestling.

“Reese is not an upper-body wrestler. He’s more nimble and uses his shots. He did the perfect thing, took that guy’s momentum away from him. It was like the matador stepping out of the way of the bull. He just let that guy come by and took him down to the mat. It was a really smart move.”

“Everybody wrestled with a ton of energy,” Branam said. “Covey is super consistent. He’s a strong kid and he moves well for being 220. A lot of those guys are heavy in the feet, but he moves like a guy half his size. That’s really an advantage. And between the ears, he’s all business. He doesn’t over-think it, he just takes care of it.”

BNL will compete in the Hoosier Hills Conference tournament at Madison on Saturday.