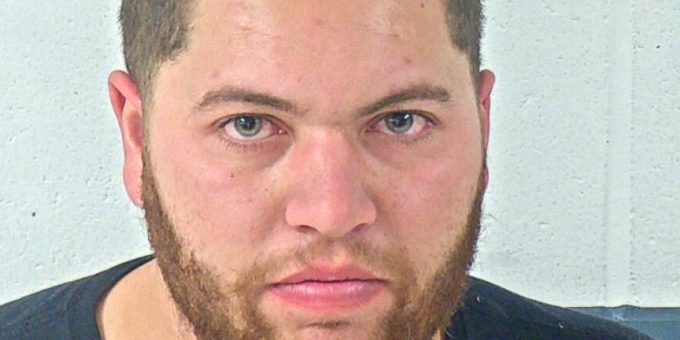 (BEDFORD) – A Bedford man was arrested Saturday after Bedford Police officers were alerted to his location.

On Saturday, an off-duty Mitchell Police officer saw 27-year-old Alexander Shipman, who was wanted on a warrant, exiting a Jeep Wrangler in the 2700 block of Eastern Avenue.

Bedford officers arrived at the house and attempted to make contact with those inside. Officers knocked on the front door several times but no one would answer the door.

Officers then heard a male yelling in the house asking who was there.

Officers announced themselves and requested that the man open the door.

An officer saw Shipman through the glass on the front door.

Shipman opened the door but kept his left hand concealed behind the wall.

He was ordered numerous times to show his hands and to step outside. Shipman refused to exit the house.

He then closed the door.

Officers immediately went into the house and found Shipman laying face down on a couch with his hands under him.

He was ordered several times to show his hands and lay on the ground. He finally complied and was arrested without further incident.

While escorting Shipman to a patrol vehicle, he began pulling away and refused to walk.

He then began screaming a woman’s name and was told to stop. He refused and continued to scream.

He was then transported to the Bedford Police Department for processing.

After arriving at the Bedford Police Department Shipman was told to exit the vehicle, but refused and demanded a lawyer. He then demanded an ambulance saying his back hurt.

An IU Health Ambulance arrived to treat Shipman. He then complained he was having chest pains and his heart hurt. He then began yelling and cursing at the ambulance crew. He was again told to stop. He then refused to let the female EMT treat him. He was transported to St. Vincent Dunn Hospital and released and transported to jail.

Shipman was arrested on the warrant and new charges of disorderly conduct, two counts of resisting arrests by fleeing, and force.