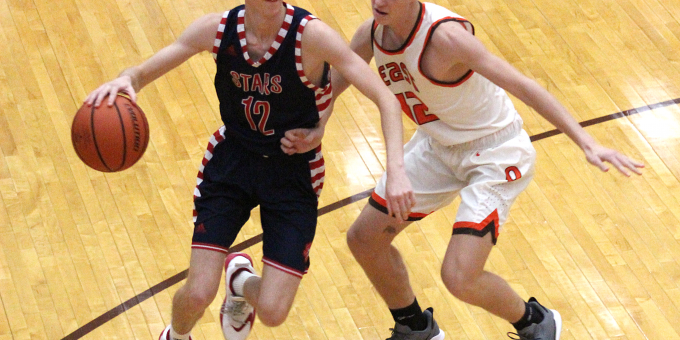 BEDFORD – If the unpredictable, explosive dynamics of playing sports in the midst of a constantly shifting virus epidemic has taught anyone anything, it’s expect the unexpected. Anything can happen and probably will. That’s been 2020’s signature.

As playwright Oscar Wilde stated: “To expect the unexpected shows a thoroughly modern intellect.” If that’s the case, BNL basketball is now a victim of the modern world, and the Stars will have to be smart about the circumstances.

Just 15 minutes prior to the start of the junior varsity game with Madison on Saturday night, BNL’s program came to a sudden halt when news of a positive case was made public. That game was immediately postponed, and the entire team was placed in 10-day quarantine (following current Center for Disease Control guidelines).

All activities were placed on “pause” and team members were forced home to play the frustrating waiting game until eligible to return to action on Dec. 23.

Just when the Stars (2-2) had recovered from their sickly start, 0-2 while scoring only 57 points before bouncing back with two impressive wins to get healthy in a hurry, they were hustled off the court and into isolation.

The pause cost BNL the home game with Madison (now rescheduled for Jan. 12) and a road test against Class 3A power Silver Creek (still to be determined).

“I hate it because we were playing well,” BNL coach Jeff Hein said. “We went over to Terre Haute North and picked up a big win, a much-needed win against a team that’s playing well. And then to go to Columbus East and win on the road, those are two quality wins.

“But we have plenty of time to make up games. The main thing is keeping the kids healthy and getting through this.”

BNL could look at the idle time in two ways. One, it could cost the Stars all the momentum from the two victories. Or two, it came at a good time because only two contests were lost. Many teams have lost more games. Hein chose the latter.

“We’ve been hitting it pretty hard,” he said. “We got an early start because of football not getting to play in the playoffs, so we’ve been working them pretty hard. They haven’t taken much time off. So maybe it will be a blessing in disguise and we’ll come back fresh, just pick up where we left off.”

The question is what to do with idle time, trapped at home, to stay in basketball mode. Running is an option, even in the brisk air, and dribbling a ball is possible (until it drives the parents crazy). Shooting outside in the cold would only last a few minutes. Watching game film is definitely a must, although it’s not as exciting as The Mandalorian.

“I hope they’re running around the couch,” Hein said. “What do you do? There’s no place for them to go work out. They’re sitting there healthy and ready to go. It has to be difficult.”

BNL senior Jackson Miracle gave a glimpse into life at home. School assignments are first on the list, because Zoom classes require a video presence or it’s marked as an absence. Homework, ugh.

“There’s not much you can do,” he said. “It sucks, but you can’t really do anything about it. It’s what is going on in the world right now.

“It probably hit us at a good time, since we don’t have as many games. But we did start to get the ball rolling on the offensive end, playing together. It was confidence mostly. Kooper (Staley, who struggled early but scored 26 points at East) got his confidence back and that really helped us.”

BNL’s next event, barring more of the unexpected, is the second annual Danny Bush Classic, a two-day, four-game holiday tournament set for Dec. 29-30. The Stars are scheduled to face Scottsburg, Owen Valley and Milan in pool play before a fourth game against either Bloomington North, Castle, Eastern Greentown or University in the final round.

The month of January will also be extremely busy, as the Stars now have eight games scheduled in a 21-day period.

“That’s fine,” Hein said. “The kids would rather play than practice, that’s for sure. We’ve done a lot of practicing so far. Kids are resilient. They’d rather have an NBA schedule.

“We’re not the only ones. I think a third of the games (in Indiana) on Saturday got canceled because of the virus. Everybody at some point will deal with this. Jeffersonville hasn’t started yet. It’s just the way the year is going to be. We’re fortunate to have four games in. Now we have a little break, and we can regroup.”