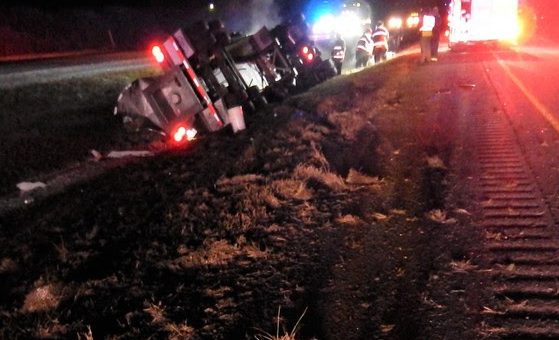 (STEUBEN CO.) – At approximately 6:45 p.m. Saturday, the Indiana State Police responded to a single-vehicle semi rollover crash on the Indiana Toll Road (I-80/90) near the 151-mile marker, Steuben County.

Upon arrival, troopers found a Freightliner semi-tractor pulling a bulk liquid tanker trailer rolled over in the center median.  The driver was trapped inside the cab and unresponsive.

First responders were not able to extricate the driver initially due to the extensive damage.  The driver, 61-year-old Stephen Robert Downs, of Colon, Michigan died at the scene. There were no other occupants in the truck.

Damage to the tanker allowed the spillage of approximately 4,000 gallons of milk, along with approximately 100 gallons of diesel fuel.  Clean up of the wreckage debris and spillage required the closure of both eastbound and westbound lanes for nearly two hours.

According to ISP Trooper Brandon Johnson, the semi-tractor/trailer was initially traveling eastbound on I-90 in the left lane.  For an unknown reason the semi-tractor ran off the edge of the road onto the soft shoulder. The driver attempted to correct but lost control. Both the semi-tractor and trailer rolled over onto the driver’s side and came to rest in the median.  Extensive damage was sustained to both the tractor and trailer.  Due to the damage sustained, investigators could not determine if Downs was restrained at the time of the crash.  Alcohol use was not suspected.

The crash remains under investigation by the Indiana State Police and the Steuben County Coroner’s Office.  There is no further information available for release at this time. With the assistance of the Michigan State Police, notifications have been made to the Downs family.